I know I have been terribly absent for about 6 weeks at least but there's been a lot going on in my life so this post is just to fill you in.

I can't remember where we left off....I THINK you know I had a knee scope the end of September which turned out to be more involved than what was originally thought.  I"m pretty sure I told you about our Mother passing away, but I don't think I've told you any of what has been going on with my health since that time.

I have a condition called necrobiosis lipodica and one of the "spots" opened up while we were traveling down to be with my Mom.  This has happened before so I thought nothing of it because it was little and always would heal back over.  I should have been paying better attention as it became very large and quite infected with two rare bacteria (which I THINK I may have picked up at the hospital where I had the scope done).  So, I've been dealing with that for the past several weeks; tried on my own for about 4 weeks and finally got into a wound clinic.  It will take about another 6-8 weeks to heal up if all goes well.  It is a very painful process as the wound has to be debrided every two weeks and once a day I have to clean it, apply the Santyl ointment and re-dress it.  Here are some photos of what I've been dealing with. 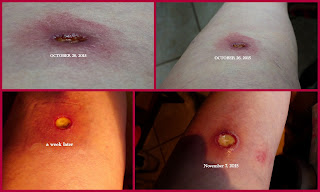 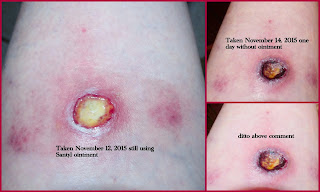 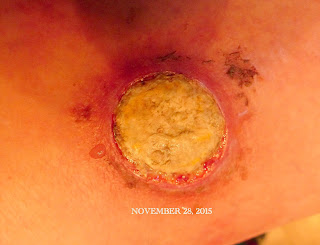 So, that is part of what's been going on.

The other part is my arch on my left foot (the knee scope and the hole is also on my left leg) has been giving me fits.   THIS was also treated before we left for the south and I thought it was all done giving me problems, but now so.  So after dealing with it for about 10 days and the pain being so bad that it actually hurts worse than the hole in the leg, I managed to get into the Orthopedic Clinic of Georgia.  I found out I have something called Accessory Navicular Syndrome which means I have an extra LITTLE BITTY bone in the area of my arch.  I've had it since birth...so I was told yesterday any way.  The "cure" for it is to wear one of those BIG boots on my foot for the next month, ice and rest and a few pain pills to help out.  If that doesn't help, then surgery is the next option.  It would be a very small incision and depending on how quickly I heal, would be "laid up" for about two weeks.

This little bone that I didn't know I had has bothered me off and on for MANY years but it wasn't any thing that a pain pill and staying off my foot wouldn't help.  I'm thinking it'd be easier to have the operation and be done with it, so time will tell.

So, this winter trip has not been as much fun as all of our previous winter trips.  In fact, between Dan's aches and pains and all of this, we have decided this will be our last winter of volunteering and most likely will spend the rest of our winters at home.  IF our cabin was winter ready, we would have turned right around and gone back home after Mom died.  But we have to have a new roof and get some heat in the place so we are "stuck" in the sunny south till such time as weather allows us to go home.

Hopefully you are still out there reading my blog and will continue to check every once in a while.  Can't say as I'm going to be better about posting because truthfully, I haven't been in the mood for much of anything.  I've had a pity party going for at least 6 weeks!

Posted by Cathy Clementz at 9:47 AM