THE NIGHT THE LIGHTS WENT OUT IN GEORGIA


OK, so it was the MORNING, but this latest ice/snow Georgia storm brought to mind all sorts of songs and/or lyrics.

There was Snap, Crackle, Pop (when all the boughs were breaking and no cradle was falling but lots of heavy limbs, boughs and assorted sizes of trees were falling).  Of course, there is Ice, Ice Baby.  And who can forget Ah ah, oh no, don’t let the rain come down.  Or Blowing in the Wind, or Windy, or You’re as Cold as Ice.  Yep, I could go on and on…and you can add your own!

But, the power left us Wednesday morning, February 12, 2014 around 7:45 a.m.  We had prepared for the storm, but unlike our “neighbors” here on the refuge compound, we didn’t have a bath tub we could fill with water.  I didn’t mind going to bed at 6:30 p.m. (it was dark and cold) except for listening to all the snapping and crackling of limbs and trees…so worried that one would fall on our 5th wheel and that would be it for us.

We were hopeful when we heard chainsaws in the distance; hopeful that it was the power company, but it mainly was the country road crews re-opening Juliette Rd or neighbors trying to clear stuff on their property.  We heard chainsaws well into the early hours of the next morning.

This was the beginning of our Wednesday a.m. to Saturday 5:30 p.m. ordeal.

Since we have been caught in worse conditions tent camping in late March in the Smokies at Cades Cove, we really thought we were prepared.  But as one gets older and gets out from  under a ton of blankets from a nice warm spot to find out that it is 31 degrees INSIDE and 30 outside, it isn’t as much of an adventure as what it was years ago.

And then came HOW DO WE HAVE COFFEEEEEE?????  Anyone that knows me knows I HAVE to have at least two cups in the a.m. and I’m good to go.  I knew if I didn’t figure that one out that I’d be grinding coffee beans in between my teeth and washing it down with warm water.

Necessity IS the mother of invention; I boiled water, then turned it down to simmer and added my coffee grounds.  I let it steep as if it were tea, then we proceeded to try to pour the whole mess into the coffee filter in hopes it would filter down into the coffee pot.  IT DID!!!  It took quite a while but we managed to have our coffee 4 days in a row that way.  I was surprised I managed to get the pan clean last night when the power finally came on.

Thursday was an interesting day due to all the ice still on all of the trees everywhere.  We didn’t plan on venturing off the refuge compound but we did spend quite a bit of the day with our neighbor, Nathan…he has a beautiful fire place and a wonderful fire.  And of course, I wanted to get plenty of photos before the almost one inch of ice started melting off the trees and bushes.  Yes, we have this kind of weather back home many times, but it is a rarity, thank goodness, for the sunny south. 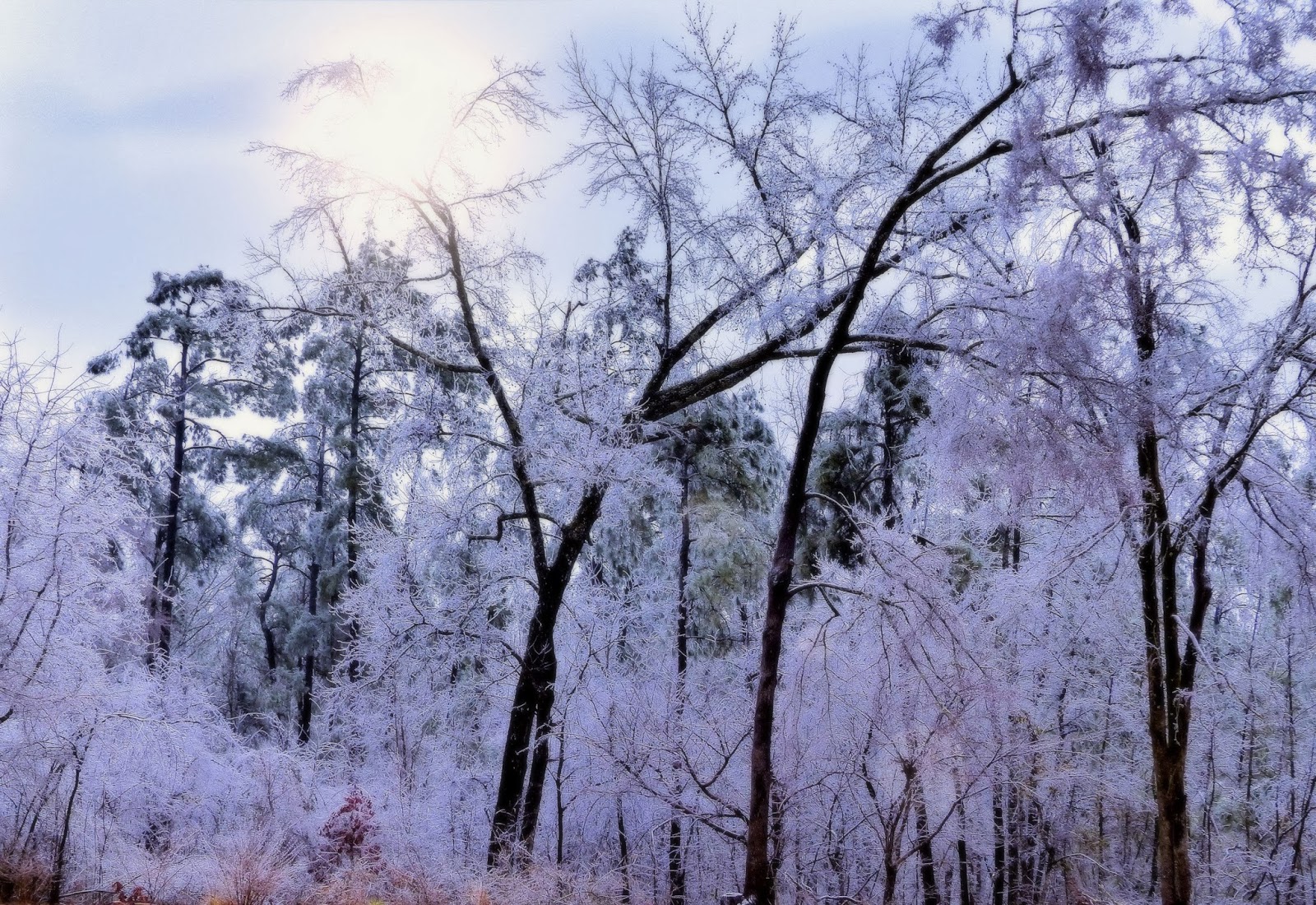 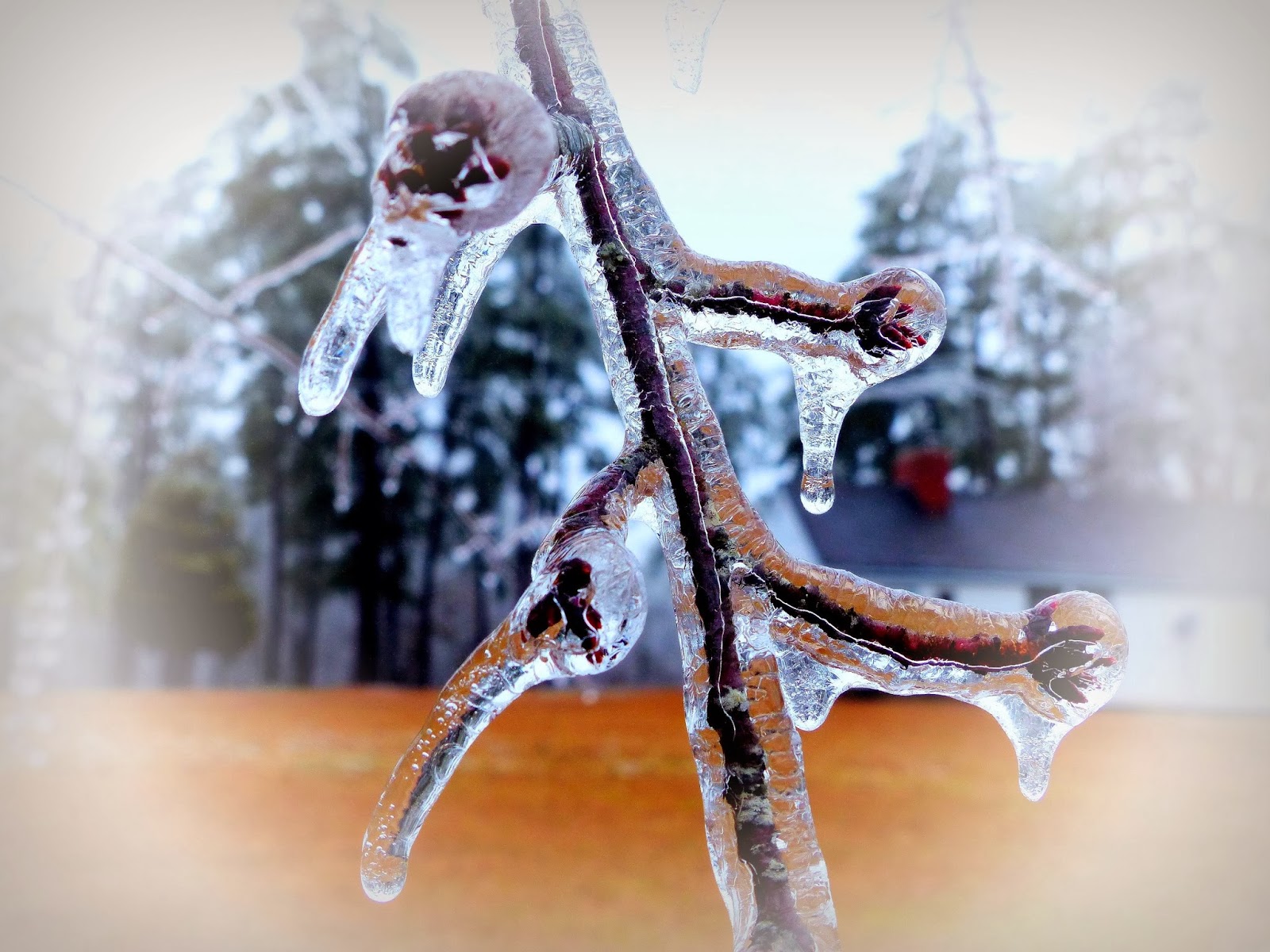 When we found out Friday that it could be into next week before the power was on again, Dan decided it was time to buy a generator.  We basically wanted one that would at least run some outlets and the furnace.  We were able to find several to choose from at Camping World in Bryon, Ga.  Dan wanted to get one that would fit in the toolbox in the back of our truck, so Saturday around noon we got the smaller version of the Honda 3000.

We got it home and got it running, then went to plug in the 5th wheel.  It was then that Dan realized that he SHOULD HAVE listened to me when we were at the store.  I kept telling him that the adaptor that the salesperson said we needed did NOT look right.  The actual 30 amp hook up on the generator is 26.6 amps and she had given Dan a 20 amp to 30 amp (5th wheel IS 50 amp, but again, we don’t need to run much).  So, we had to make another trip back to Bryon (after calling to make sure they DID have the correct adapter).  I think it may take 45 minutes to get from here to there, plus of course the FUEL cost.

When we got home, Dan got it fired up again and what do you know!  POWER!!!!

Nathan called us about 40 minutes later and said “I hear your generator running.  Did you know the power came on about 30 minutes ago??”  NO, WE DID NOT KNOW THAT! DUH!!  Dan said that after all the hassle and waiting to make the decision to get it or not and having to go back for a different plug he was going to let the darn thing run!

Even though there was no power on Friday, it ended up being a work day which was fine…boredom had set in in a BIG way.  Nathan took the loader/backhoe and Shannon, Dan and I followed along in one of the trucks.  Our job was to get the smaller stuff out of the road so Nathan could concentrate on the bigger limbs and trees.  I think we got about ½ of the north end of the refuge done and while we were doing that, Andrew, the refuge manager was riding the other side of the northern part of the refuge to see how bad it was.  It was an all-day project just to get the ½ done that we did. 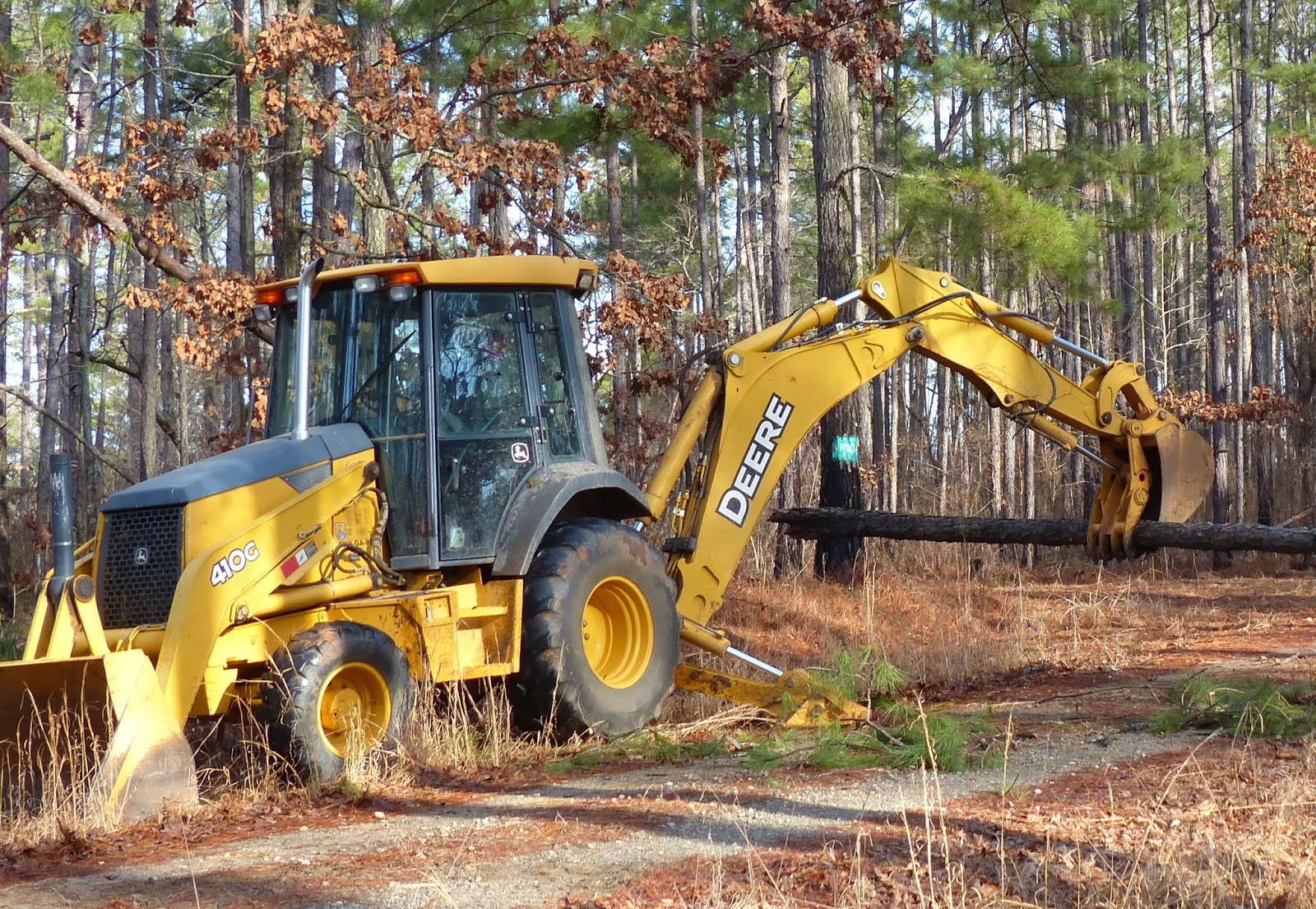 Nathan did an excellent job with the backhoe.  The refuge staff and management should be proud of his work.

Since Friday WAS Valentine’s day and even though we were working, Dan still managed to sweep me off my feet…or I should say BRUSH me off my feet.

We had stopped to move some fairly good size limbs off the road.  Shannon thought she could get one of them by herself, so Dan and I were trying to move the other one.  Dan was at the very end of it and I was trying to get a hold of it a ways down from him.   He shifted it as I went to grab so the limb came BACK and I went forward…head over heels and right over the limb.  Believe me; I am like a turtle once I fall down.  He came over to me and asked “Are you OK?  Are you hurt?”  All I could think to say was “Are my glasses broke?”  I landed on my face and at the last nano second, I turned my head so the side of my face and my glasses took the brunt of it (along with my left knee which is now a range of colors).  So, yep, he “brushed” me off my feet.

As the saying goes, you don’t realize what you’ve got till it is gone.  I think we did really well without power and we are thankful that it didn’t get extremely cold during the time the power was out or THAT would have been a huge issue (prior to having the generator).  I played with my Kindle and read a book till THAT went dead.  Dan kept busy while he could still see by staring at the TV and wondering what he was missing.

Now THIS week we are supposed to be in the 60’s and possibly into 70 one or two days!  We have had red winged blackbirds at the feeder and suet blocks for at least 2 weeks, but last night we heard sandhill cranes flying over!  Dan counted twenty.  By the time I got out of the 5th wheel, they had already flown out of site.  We figured they were looking for a place to bed down for the night.

There ARE buds on the trees and we truly hope this winter is O V E R!!!!
Posted by Cathy Clementz at 2:05 PM