OK, so maybe it WASN’T Fran and maybe Fred wasn’t even there…and possibly there were more than 5 fish…but they WERE fried.


I didn’t think a title of “WAYNE AND JASON FRY FISH” would be as catchy.


But fry fish they did!  And hush puppies!  And french fries!  Southern men can COOK!!!  There was more than enough to go around so if anyone left hungry, you can only blame yourself!! 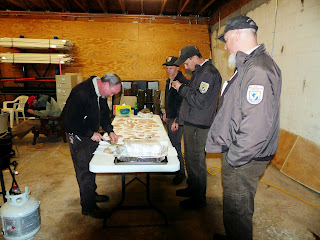 This is the last weekend of the deer hunt on Piedmont for this season.  There were only 6 deer that were killed and brought in yesterday.  Makes for a long day and makes for an even longer day for the LEO’s.
I woke up this morning with a big pain in the neck (and NO, I don’t mean Dan).  When that happens the best thing for me to do is get up, wrap the ice bag around the back of my neck and sit still.  It usually turns into a roaring headache but I think I got it in time.
So, what have we been up to??  Other than eating too much at the deer check station?
Dan finally splurged and got a Nokia Lumia Windows 8 smart phone (matches mine).  Now he is trying to learn to use it.  It is difficult for him to go from a dumb ass phone that he has had for SEVERAL years to a smart phone.
While he was busy trying to get use to using/finding various parts of his new gizmo, I was busy trying to set up an email account for him.  That way he can download various apps to his phone.  He doesn’t want to email anyone but needs an account for certain features of his phone.
Mainly, all I could hear from him was “Whoops!  Gosh darn it!” (Polite version).  He said that so many times that I knew what to make his password…WHOOPS.  Of course there are a few more little letters and numbers involved to make it harder to figure out than just plain WHOOPS!
There are a couple of things that I am very thankful for as far as any cellphone; they can change their own time.  You don’t have to worry about trying to remember which button to push and then worrying about whether you have set it for alarms.  Thank you cell phone gods for this feature.

Dan will have trouble with seeing the little bitty letters on the little bitty screen and using his dainty little bitty stylus.  But he has to keep practicing.
For instance, he accidentally tapped on something that set his cell phone to ‘LEARN TO SPEAK SPANISH WHILE YOU SLEEP!”.  I didn’t know it had that!  It won’t do either one of us any good because the cell phones are shut off before bed time.


Then there is also the following: A GPS to help you find whatever it is you are looking for.  It will also help you get from point A to point B assuming you have a clue where point A is to begin with.  When we headed to the corner store the other day, I told Dan that he should learn how to program this feature.  You have your choice of what language you want the directions in and whether you want male or female voice.  Since I have male and call mine Sam, Dan decided he would have the female version and currently calls her Dumb Bitch.  I’m sure he will come up with a more appropriate name eventually.
The reason he hopped on this name was because after she told him to ‘FOLLOW THE COURSE OF THE ROAD FOR 9 MILES” (in a less than sexy voice) she immediately went DING! DING! DING! to let him know he was .7 mph over the speed limit.  DUMB BITCH just came naturally after that.
As many users of smart phones know, there are all kinds of apps that come pre-loaded on the phone.  I’ve yet to discover all of them, let alone use ½ of them.  I’m sure there is a monitor someplace in there to help you check your glucose level.  Oh, and a metal detector??  I think that is what that symbol is..or maybe it is a blood pressure monitor?

And just like on lap tops and computer keyboards there is a scroll lock button for unknown reasons.

You will also find a button for a decibel level meter to measure loudness in rock concerts, airports, and sounds exiting the back of your pants. If you don't have one of these features, you are already out of date.

It comes with Noise Canceling Headphones (you are absolutely guaranteed not to hear outside noise like fire trucks, ambulance sirens, or an SUV's squealing brakes just before it slams into your legs, crushing you under 7,000 pounds of steel...although I think some serious cell phone users don’t need the headphone anyway since they are so lost in their conversations/texting/games). It actually comes with 2 sets of wireless headphones. Ear buds for summer and big huge headphones that double as ear muffs in winter which are really good in our neck of da woods.

You can also get weather forecasts for anyplace with the patented Doppler 1,000,000,000 technology that is guaranteed to be as accurate as your local TV Weather forecast and/or a polar bear flipping a coin. You don't have that feature either?? Damn!!!! You ARE behind the times!
Or how about an app that helps women track when their periods are expected to start?  I can picture it now; some woman in the middle of a grocery aisle and an alarm goes off alerting her (and everyone within hearing distance) “WARNING! WARNING!  IT IS THAT TIME OF THE MONTH!! GET  YOUR TAMPON READY!”
And with THAT thought in mind, how about an app that detects pregnancy?  Since cell phones seem to already go with their owners to the bathroom and since so many cell phones seem to spend a lot of time IN the toilet…well, you see where I’m going with this, right?

Now if you only had some friends who actually cared enough to contact you...
GOOD LUCK, DAN!!!

Posted by Cathy Clementz at 8:31 AM