It has been an interesting couple of weeks since I last posted.  We've been extremely busy with campers and lodging guests.  YAH!!!!

And in among those campers and lodging guests are a few that stand out in our mind.

We had guests from Melbourne, Australia.  They are living in Michigan for a couple of years due to the hubby's line of work bringing him here.  We didn't get to spend a lot of time talking with hubby, but did with the Mrs.  She was a  hoot!  I know she and I could have become good friends in a heart beat...even with a bit of an "accent barrier".  They and the kids stayed in one of our cozy cabins. 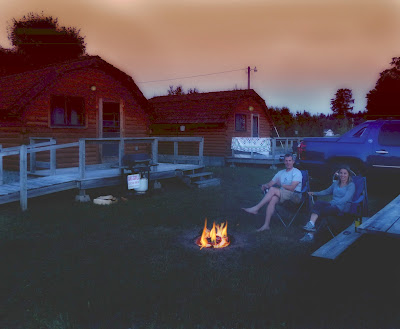 We had a LOT of campers the first week of July all of various shapes and sizes...by that I do mean their RV or what they were camping in.  Everyone seemed to have a great time and all of our guests were respectful of each other; this year we had no issues with firecrackers, etc so that is always a plus when we don't have to deal with that. 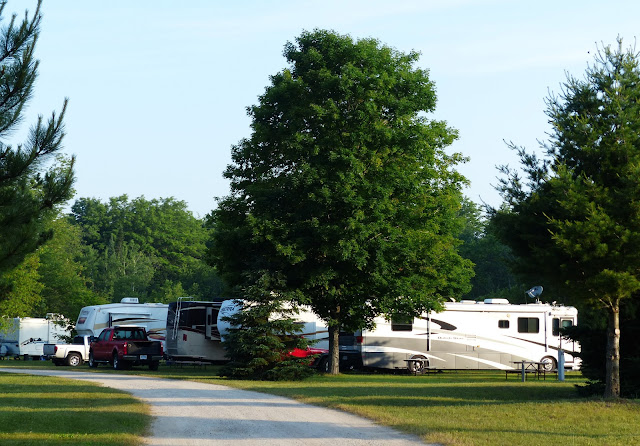 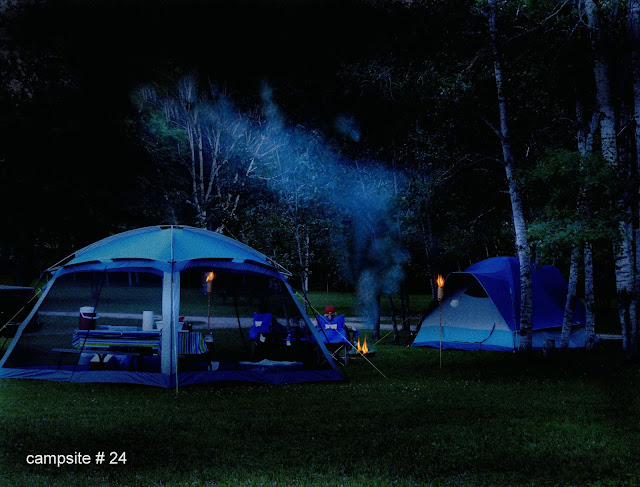 THEN IT GOT INTERESTING...

I won't mention any names nor will I mention the country which this RV'er was from, but he and she had a very LARGE RV (I'm not even going to mention the type of RV because I don't want anyone thinking I tell on everyone).

After checking him in and giving him directions to get to his site,  he left the parking area in search of his site...which was (and still is!!) a HUGE, LEVEL pull thru spot.  He had plenty of room to spare either entering, parking or leaving this site.  He was approaching his site WAY to fast for starters.

Next thing we know, he has backed his rig into the fence that protects the dumpstation towers (thank goodness for the fence!). BANG!!!!

He didn't even know it and kept trying to go back and forth to get into this very easy access site.  His camping neighbor finally got his attention and told him that he had backed into a fence and broke it and had done damage to his rig.

Dan and I have a theory for this  "BIG BANG accident";  the man is new to RV'ing and shouldn't have left his homestead till he had plenty of practice with this triple axle, especially driving forwards and backwards.

There was the family that asked to leave their RV off site on their check out day so they could go touring in the Soo that day.  They have a big motor home and I told them where they could park it for the day.

It was very warm that day and got even warmer towards the late afternoon....which is when we found out from another camper that there was a dog in this moho and the dog had it's head hanging out a window panting.  Now, in order to hang his head out the window, he had to have torn a screen off.  I WAS SO UPSET I ALMOST CRIED IN FRONT OF THIS MAN.  I started making  phone calls trying to catch these people while Dan went out to see if he could rescue the dog.  About the time he got out to the RV, the people were pulling in the driveway.  Dan asked them if THEY would leave a child like that, or would THEY like to be left like that and didn't they know it was illegal, etc.  The only answer they had was they didn't know it was illegal.  Needless to say, from now on if any one asks to leave their RV for even an HOUR off site, unless the temp is not going to get above 60 degrees that day, I will not allow them to do that unless they take their pet (whatever it is) WITH THEM!!!  I thought about that dog all night and hoped he was OK.

Then we had a gal who let us know, on her way of checking out, that she had slipped and fell when she got out of the shower.  We are assuming she meant when she left the shower dressing room area because there is not anyway for anyone to slip IN the shower NOR in the dressing area.  The told us how bruised she was since she was on coumadin (spelling??) which made Dan and I both wonder, but we didn't ask "THEN, WHY, EVERYTIME WE SAW YOU DID YOU HAVE A BOTTLE OF BEER IN YOUR HAND??"  But, we didn't mention it. We did thank her for the info and informed her that in 22 years of business, she was the first one who had told us that.  Hmmmmmm....

The next day, while checking our business FB page, she had posted a message about her fall in the shower and for "ladies out there to be careful".  She did not mention that when they checked out from there site, that their dog(s) had dog holes in the campsite big enough to twist someone's ankle.  Our rules let pet owners know that they are financially responsible for damage caused by pets.  Since this was a "dirt cheap" fix (pun intended) we didn't pursue it.  Fortunately Dan had checked the site before the next guests arrived.

Posted by Cathy Clementz at 9:08 AM