WHEN WE GET BEHIND CLOSED DOORS


Do you know what claustrophobia is?  It is the fear of being in some place that is closed.  For example, I’m going to the liquor store to buy some booze and I’m afraid that it is closed.

No, that’s not it.  THIS is it; Claustrophobia definition, an abnormal fear of being in enclosed or narrow places.

There is also Cleisiophobia- Fear of being locked in an enclosed place. 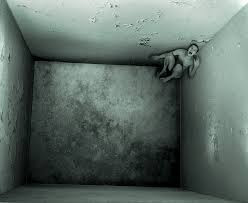 Fortunately for our “Hired man” Rory, he has neither problem.  He seems to remain calm and level headed with any situation that we have seen him in (well, SO far anyway, but summer is just starting!)

When Dan got into the front part of the shop, he heard a faint knocking on a door.  At first he thought he was hearing things, but then the knocking got a little louder and he heard someone saying “I’M IN HERE!!”

When Rory had gone into the backroom, he shut the door behind him so the room wouldn’t get full of mosquitoes.  He found the volleyball net, right where Dan said it would be.  When Rory went to leave the room, the door knob would not cooperate; it just turned and turned but wouldn’t connect with any of the hardware intended for the purpose for making the door knob work with ease.  He was stuck “behind closed door”.

He realized that it would be a while before anyone thought he was missing.  About that same time he realized that this was the first day since owning a cell phone that he had left it in his car.  So, level headed Rory found one of our camp chairs, unfolded it and decided to sit and be comfy while waiting to be rescued.  Not much else he could do and at least he wasn’t in the dark and the mosquitoes weren’t going to carry him off.

Dan rescued Rory and of course Rory has taken some good hearted joking about the whole thing.  So it is a very good thing Rory is NOT claustrophobic nor is he Cleisiophobia (THAT is your word for this week).
If Rory had either of these phobias I’m sure there would have been some re-arranging of all the items in that room in an effort to try to find a way out.

But yesterday just did not seem to be Rory’s day.

At one point, he came in and asked if he could use my mosquito net.  He got all set up with that over a cap, put the elastic straps under his arm, put his coat on top, zipped the coat up.  It was clear that no insect of any type was going to get under that net.  Before he went out I asked him if he wanted a couple of cookies.  What young man doesn’t want a couple of cookies, right?  About that same time I realized that in order to have a cookie or two, he’d have to undo all that he had just done.  And about the same time he was reaching for the cookies, the same thought occurred to him…there wasn’t any way to eat it without taking the net off.  Not to worry, he could have some later.

Rory is a good kid (well, not so much a kid; he just graduated from HS) and we are fortunate to have him!  Even if he does try to take a break behind a locked door!
Posted by Cathy Clementz at 7:19 AM