HOW DO YOU CONDUCT YOURSELF?


I never realized how many different “definitions” of conduct or conductor there is!!

I also never realized HOW many responsibilities the conductor of a train has.  I thought they just shouted “ALL ABOARD”, and collected tickets once the train was underway…and got to wear a really neat cap and uniform.

I thought all conductors were male.    I pictured them all wearing a pocket watch with a long chain attached someplace under a vest.

Well, SOME of my suppositions were correct, but I didn’t begin to give enough recognition to the train conductor.

Yep, they do shout All Aboard!  Yep, they collect tickets and punch the other half of that ticket if you are on a return trip.  Yep, they wear nifty uniforms (I never did consider their dress attire a costume, so at least I was correct that it IS a uniform).  And YES!  There are female conductors as well as female trainmen.

And no, I didn’t know the difference between the two (I MEAN between a trainsman and the conductor…not between male and female!!).  There should always be a trainman on board as well as the conductor in case something happened to the conductor during the trip.  The trainman has the same education (I didn’t want to say “training” in case you’d think it was an intended pun!)

If a person misbehaves on the train to the extent that person is a real nuisance or threat to the passengers, the conductor has the authority to stop the train right there and that person is made to leave.  I don’t know what would happen if they physically disputed being removed from the train.

The aspiring conductors DO go thru an intense training as well as working with a conductor while going thru the training.

Before our train trips, the conductor and the trainsman have a briefing with the crew (in this case the volunteers on the SAMS Shortline) 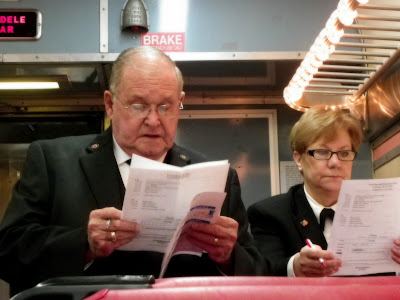 So, these are things I never thought about but it is another group of individuals that works long (VOLUNTEERING for the SAMS Shortline) hours without people actually understanding what it is that they do. 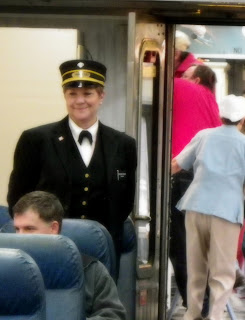 Dan and I had the Archery Car, named after the town of Archery.  We did not have a full load in our car, but we did have a very well behaved group of boy scouts as well as a few families.

Some of the things that WE have to make sure of is that when on the train, either getting on, off or just sitting, SHOE LACES MUST BE TIED.  Flipflop shoes are not allowed.  Little kids are not to stand on the seats (common sense, one would think, but I had a little guy who almost took a header because Dad was allowing him to stand in the seat while the train had stopped and was slowly getting underway).  It was more an issue with the families “misbehaving” than it was with the Scouts.  And I don’t think the Dad liked it that I politely asked him to have his little guy sit down and if he wanted to stand, to stand on the floor.

One of our volunteers, who is the authoress that I have been designing posters for her book signing, plays the accordion and provides entertainment, car to car along the trip out.  On the way back, she amuses the kids (and some adults I’m sure) with her balloon animals, or swords, or plant shapes.  She carries all colors of balloons in her apron and asks each child what they would like to have her make.  This trip, one of the other volunteers was assisting and learning the craft. 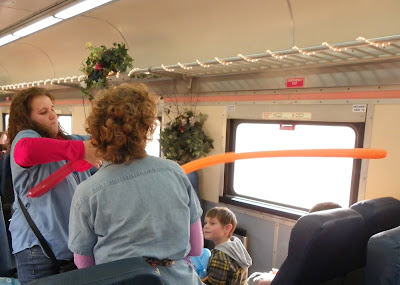 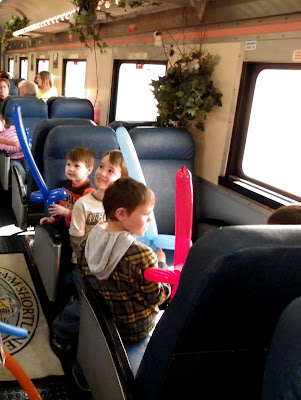 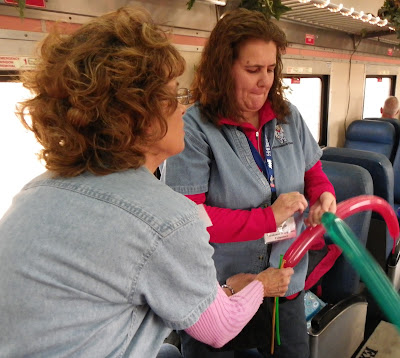 When our SAM trip reached Plains, Ga and Dan and I made sure that our passengers in our car had all disembarked safely, we decided to walk “downtown” and get some of that famous Peanut Butter ice cream at the Plains Peanut Store.  This store was the campaign headquarters of past President Jimmy Carter.

All guests coming into this quaint little store are greeted at the door with a very kind lady asking if you would like a sample of their peanut butter ice-cream (you get a spoonful) and to please help yourself to one of the little cups of their fried peanuts.

We moseyed (polite way of saying we elbowed) our way to the back of the store to the ice cream counter and each got a cup of the famous ice cream…and let me say it was a good size portion, especially when it was 47 degrees outside, sunny and a wind chill of probably 37.  WHO thinks ice cream when it is THAT cold??!  EVERYONE ON THE TRAIN!

The ice cream is AWESOME and the peanuts were wonderful.  Dan and I will be making a trip back by car so we can spend more time in the shop and pick up a good supply of those peanuts! 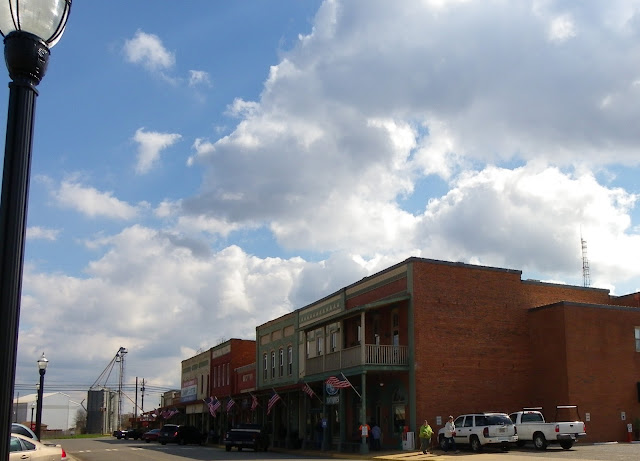 We walked back to the train and Dan opted to stay outside for a bit.  Since I was cold and still had ice cream left, I went inside to the commissary car, where Mary Beth (the trainman for the day) was.

I asked her if some time, didn’t have to be right then, would be possible to see INSIDE the engine.  About 10 minutes later, Dan and I were IN the engine car being shown around, which when you see the photos, there isn’t much to be shown around, but it gives you an idea of the view that the engineer and HIS conductor see (the engine conductor is responsible for getting out and switching tracks among many other things).

Brian was extremely helpful with questions (like if an engineer is new to a particular train line, how do they know when  they need to blow the whistle; they have a manifest of those type of things with each trip they make whether it is new territory to them or not).  He also explained that WAY back when, at a point in time when trains were making cross country trips without the engineer having much time off, there was an actual functioning “bathroom” in the engine.  He opened a very little door in the wall in the front of the engine (still inside the engine) and with what looked like a very steep step down, there was a toilet!  I think it would take two people to get one person in and out of there because I cannot see anyone getting in there or out of there without being in a fetal position. 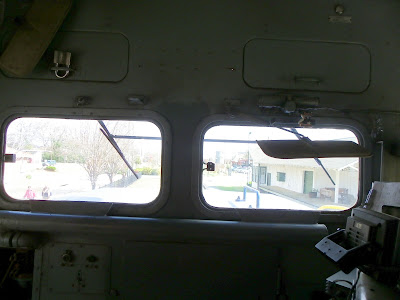 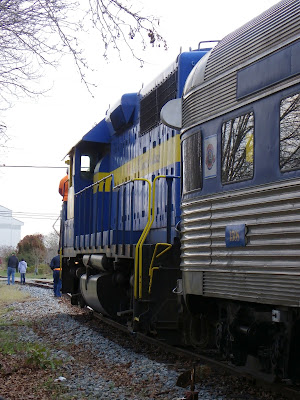 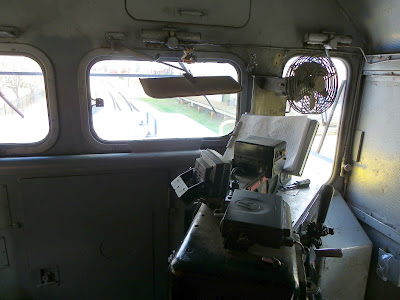 The next trip is not until March 2.  This trip is called the Plains Pig Pickin’ and Prime Rib Buffet supper.  We will depart the Georgia Veterans state park at 1:30 p.m., arrive in Plains at 3:00 p.m..  There is a short 10 minute layover there, more likely to pick up more passengers and then we depart for Archery, which IS President Carter’s hometown.  At 3:40 we depart Archery and  head back to Plains where at 4 p.m. AWARDS (at this point I don’t know what the awards are for) will be presented by President Jimmy Carter.

At 5:00 p.m., we depart Plains and arrive at Georgia Veteran’s State Park at 6:30 p.m.  At 6:45 p.m. there will be a prime rib buffet supper for the passengers at Lake Blackshear Resort.  The supper is included in the price of the tickets.

This is a very good value considering what your day will consist of!

If you would like lots more info, please visit SAMS Shortline Excursion Train


Hope to see you All Aboard!! 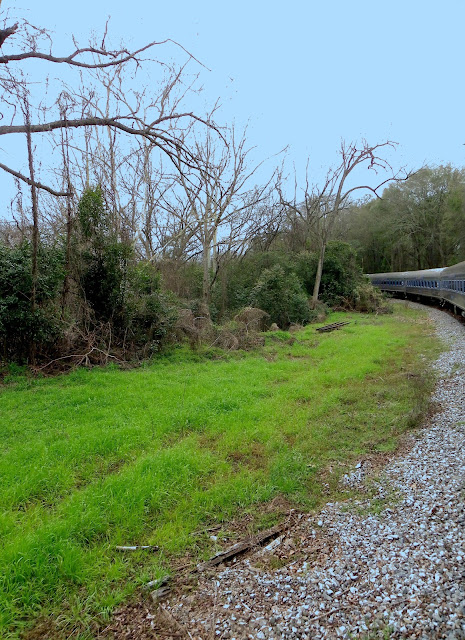 Posted by Cathy Clementz at 2:42 PM