OUR TRIP TO ANDERSONVILLE HISTORICAL SITE


Andersonville; we didn’t quite know what to except or what feelings we would have.  Dan and I “enjoy” visiting the battlefields and these types of historic sites.  We try to imagine what it was like “at that time”; what the landscape was like mainly because there isn’t any way that we can put ourselves in the places of the people who fought and died for our Nation.

When we arrived, we went thru the POW Museum.  I could tell about half way thru Dan was ready to find the exit.  He was not a POW, but I know it stirred memories that he would just as soon forget.

We then watched the documentary of the lives of the men who lived and died while in the Andersonville prison.  The prison was originally built to contain 5000 prisoners…not the 30,000+ that ended up behind those walls.

We could not imagine 30,000 men imprisoned, shoulder to shoulder, hip to hip trying to survive.  Little or no food and what there was could have been contaminated with mouse droppings, insects, etc.   Men  using “teaspoons” to dig down into the earth to find clean water, sometimes as deep as 50 feet.  Others were digging down to make tunnels so they could escape (only to be captured a short time later). 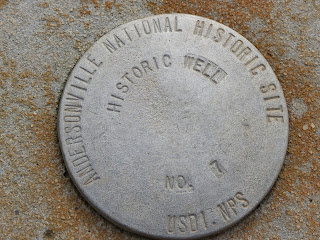 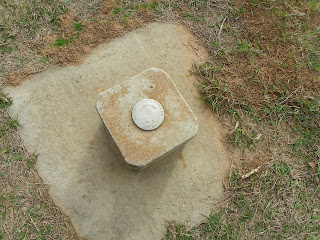 As I recall there are about 50 of these markers (above) indicating where wells had been dug out in desperation with teaspoons or anything else they could spare.  There are also markers such as these indicating where tunneling had been; most of those are surrounded by a wrought iron fence so as to protect visitors from being too curious.

During one of the hottest and driest Georgia summers, men were slowly going insane from lack of water and lack of food.  Then, thanks to God, one day a storm broke out complete with rain, thunder and lightning.  A lightning strike to the ground was witnessed and at that point a fountain of water sprang up into the air.

Yet today, this artesian spring is called Providence as the prisoners so aptly named it.

So, when you stand on the hill where the captain could oversee the prison, and you look at that vast expanse towards which the cannons are pointed, there just doesn’t seem to be any way to imagine just the HUGE structure that was the stockade let alone the horrors within its walls.  It humbles one. 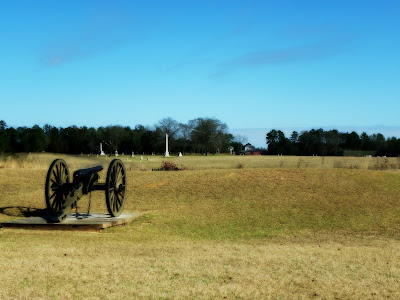 O
(On the hill looking towards where the stockade and 30,000+ men were.  Notice a few monuments in the background, left hand side of photo)

We also visited the cemetery and again, we were both amazed at the grave markers there.  We’ve seen photos of them in books and on TV shows, but until you see it for yourself, it doesn’t seem possible that ALL of those markers actually ARE there.

There really isn’t any place to pull off to park to allow you time to walk among the graves to search for names that you might recognize, or see how many might be from your home state, but it was a privilege to have been able to pay our respects to all of those that ARE buried there and to all of those that there are markers for but no names (due to having been buried in trenches as they died in prison).

(Please check out this link if you want more info about those unknown soldiers
http://www.nps.gov/ande/historyculture/camp_sumter.htm 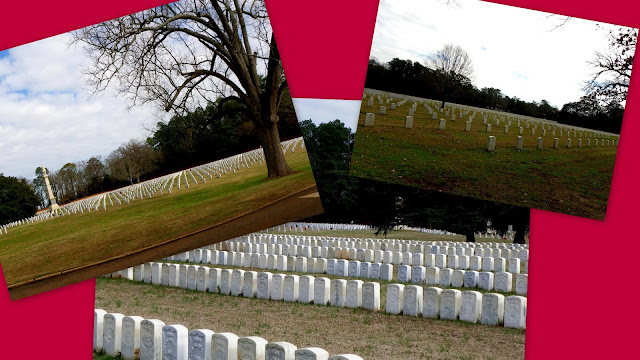 This weekend has been an interesting one complete with a very emotional visit to Andersonville as well as some hilarity in public restrooms.

It seems I am deemed to have close encounters of the weird kind in public women’s rooms.  There has been more than once that I thought the woman in the next stall was talking to me, but even after answering and getting a somewhat appropriate response, I finally figured out she was on her phone with someone.

Or the time I went to grasp the LARGE roll of toilet paper off the top of the LARGE plastic wheel it is delicately balanced on; the whole big roll dropped to the floor and as Murphy’s law would have it, it landed right side up and rolled right out under the door and across the floor and over by the sink.  I’m left sitting there with the end of the roll which is still attached to about 20’ of toilet paper.

My timing and/or luck amazes even me at times.

On Friday, we went to Americus and checked out a few stores, one of them being THEIR Super Wal-Mart store.  We decided to use the restrooms prior to launching our grocery shopping attack.  When I walked in the women’s room, I could see feet in the first stall so I already knew I needed to walk on past to the next one or the one after.

As I crossed in front of the first stall, I saw out of the corner of my eye that the door was NOT closed, nor did the woman make any attempt to close it.  She did, however, say “Excuuush me”.  Me thinks she was a bit tipsy…and she made no attempt to close that door….and she was still in there when I left.

Posted by Cathy Clementz at 7:24 PM