AND SO THIS IS CHRISTMAS

DAVE got the answer right to the last song...let's see who gets this one right.  Thanks Dave for playing along!  I know I've been kind of remiss with my song stuff lately...

Yesterday we drove birders around the refuge in search of how many species and numbers in a flock of birds they could find.  This is known as the Christmas bird count and it is done all over the world.  Dan took a group of 3, I took a group of 3 , one man went off on his own and at lunch time we discovered he'd been poaching (which means he had been in other groups "assigned territory" and had been counting birds for HIS list), and Jason took the same fella with him as always wants to go with Jason.

Considering that it was a miserable, WET, day which did require me to use 4WD at one point, I'm surprised they got as many birds counted as they did!

Here's more info about the annual count if you are interested;National Audubon Christmas Bird Count

Saturday evening Glenn, one of the men that works here at the refuge, invited Dan and I to their churches live nativity and the supper that was served at the church afterwards.  Thankfully the weather cooperated.  It was a wonderful thing to see how the members of the church put this on and how members of the community came to see  it.  There was even a visit from Santa after the supper. 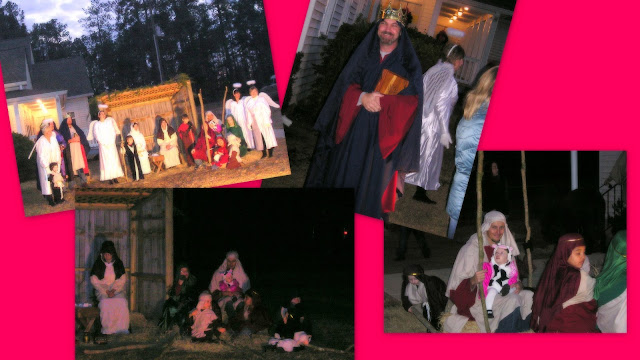 Hard to believe that it is almost Christmas!  And we have had an invitation from Karen and Glenn McMichael to join their family on Christmas Day.  Dan always feels like he is intruding if invited to someone's home for a holiday, so I'm not sure if we'll be headed there or not.  But the offer was deeply appreciated and touched both of us.

That's about it for this time!
Posted by Cathy Clementz at 6:30 AM