Yesterday  while Dan and I were blowing leafs, pine needles and debris off the parking lot and from around the visitor center, a gal drove her car up to the locked gate, got out and asked me if I was the DNR.  I wasn't sure what she said since I still had my blower running (I have a HARD TIME getting it started).

I shut it off and told her that no, we were a National Wildlife Refuge.

Turns out she had a HAWK IN HER CAR, WRAPPED IN A BLANKET BEING HELD BY HER DAUGHTER IN THE BACK SEAT!

She had been driving around for over an hour with it trying to find some place that would take it.  It had been found along side the road, down an embankment by some other people.  This gal happened along and wanted to see what was going on.

The other people told her if she could take it to (and I don't remember where she said it was) the DNR they would take it.  Of course being Sunday she couldn't find anyone...till she found us.

We got the girl, the hawk and the blanket out of the backseat of the car, walked around the locked gate into the parking lot and gently tried to take the blanket off the hawk so they could have the blanket back.

I told her I would get in touch with someone on the refuge and we would see it was taken care of, one way or the other.

Dan and I figured the best thing to do was to put it in the woods (which surrounds the visitor center) and hope for the best.  But I thought I better call Andrew or one of the LEO's to make sure, since this was a "refuge hawk" that was what they wanted us to do. And it was.

But before walking it out into the woods to sit it down, I got a few photos.... 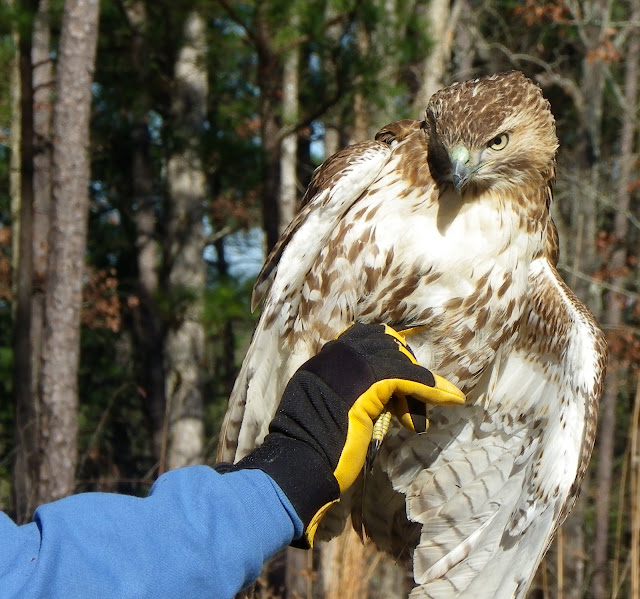 PREPARING TO CARRY THE HAWK TO THE WOODS 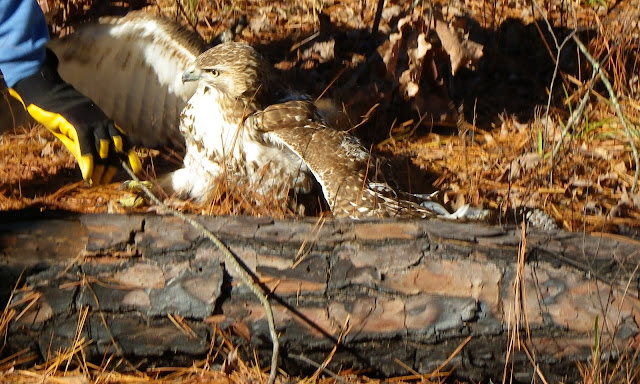 SETTING THE HAWK DOWN IN THE WOODS. 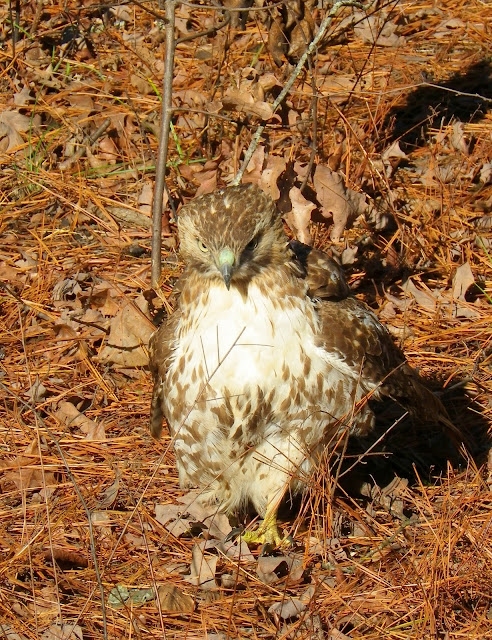 HE SEEMED TO BE A LITTLE MORE PERKY THAN WHEN WE ORIGINALLY TOOK HIM.  AT FIRST, HE COULDN'T EVEN STAND UP.

So, we went back this a.m. to see if he was still where we had left him...and he was...and he was dead.  We bagged him and tagged him and put him in the freezer at the deer check station.  Since there wasn't any outward visible injuries, he will make a good mount for the new display center at the VC.

At least I HOPE that is what happens so his death wasn't for nothing.

Posted by Cathy Clementz at 6:56 PM