HISTORY IN THE STORE ROOM

Dan and I are on a mission to clean up a lot of our junk (well, I THINK IT IS JUNK, he does not) before we leave for the fall/winter.

Dan's junk room has also inspired a lot of little visitors in the form of mice.  The seem to be especially inspired this time of year.

And when we return in the spring, we find signs of them in various places.  They were so hungry one winter, they were eating soap!

I told Dan the other day that I thought we had a mouse already.  He was sure that he had all the places covered where they could get in and that I was imagining it.

Fortunately, the other day, as I started down the hallway, I said "looky here!!  See what is in the hall way??"  Yep, it was a mouse; a mouse in the house.  He must have been an ill mouse because Dan was able to come up behind him and stomp him to death.  Fortunately he didn't squash any innards out.

So this brought us to this cleaning binge we are on at the moment.  Some things are hard to part with while others you shake your head and wonder why in the hell was I keeping that?

I've got a collection of paperback books called the White Indian Series.  I most likely will never read them again, but I can't part with them.  I won't even put them out in our book exchange library.  Then we came across Dan's first hair cut (which his Mom tied his ringlets together with a bow on each one and kept...yes, you read that right, Dan  had RINGLETS of blond hair!!).  Luvetta had kept his ringlets in a box that she eventually gave to me.

So MY mother thought it was only fitting that Dan have MY first hair cut.  I think I was about 5 years old...had beautiful long hair, but I had begged Mom for many days to cut it.  Must be I was tired of pigtails that pulled my scalp off my head (Grandma Cora could make pigtails that would leave you with almond shaped eyes), or I was tired of all the snarls that had to be combed out.  Mom finally agreed to cut my hair...and we both cried afterwards.  I remember her laying on her bed and crying, so I'm not sure if I was crying due to my missing hair or because my Mama was crying.  So, Dan got my first hair cut...and we came across those this afternoon.  Naturally, we are keeping those two boxes.

We knew that we had an old diary of one of Dan's uncles from the Civil War, and we've tried before to read it, but the writing has faded and the pages are very little.  However, I did take some photos in hopes that I could tweak them a bit so maybe more can be read out of this diary.  We came across the diary, and the pipe when we were cleaning.

So, I'm putting them here for you...let me know if you are intrigued enough; I may post more again sometime.

BTW, his Uncle WAS a prisoner so we were surprised that he was able to keep his diary.  We know some of the pages he wrote about his captivity but it is so hard to make it out... 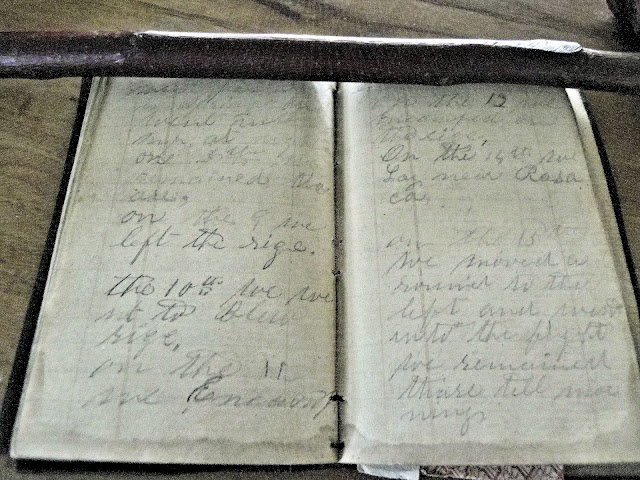 Do you see that stick laying on the top of this diary?  It looks like it came off a cherry tree possibly?  That is the stem of the pipe that I told you about. 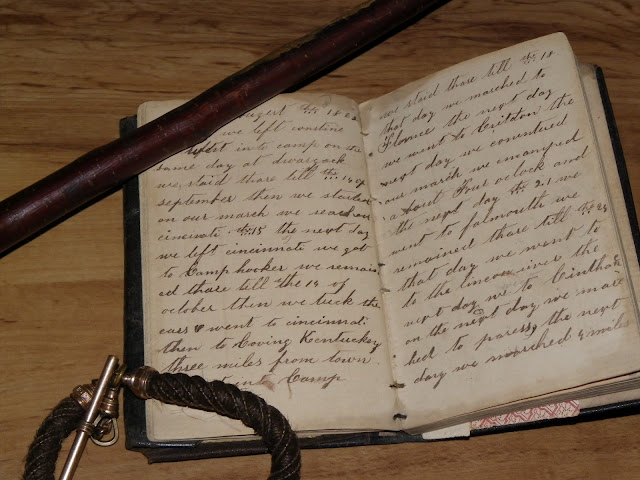 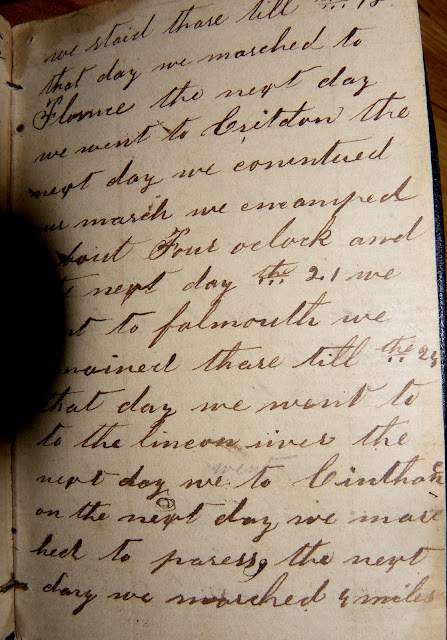 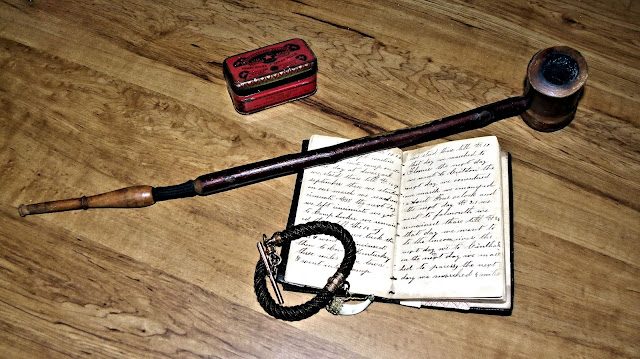 There is still ash in the pipe bowl.  I'm not sure why the "mouthpiece" of the pipe is made the way it is; does anyone have any ideas?

The other two items there were his Uncle's as well.  We believe he braided that whatever it is at the bottom of the photo with his beard hair and it was found inside that tin box on top.  The box is dated January 1, 1892.  The printing on top of the box reads "Penny Royal and Tansy Pills"  It also says "Only safe and reliable pill made" and on the other side it says "Colchester Drug Co. Sole Agents"


It is all very interesting to us and I hope at some point we will be able to figure out more of the diary.  We do know at one point, from reading the diary, he was at Chattanooga.

Dan and I enjoy visiting battle fields but when you actually have a piece of that history in the family, it makes it seem much more alive.
Posted by Cathy Clementz at 2:42 PM