Yep, it is that time of year again, when school buses loaded with excited walkers head from Mackinaw City to the St. Ignace side across the Straits.  Hard to believe there was a time when the Mighty Mac wasn't there and people (including myself and my family...I was just a little squirt then) had to take the ferry to get to the other side.  So with that in mind, here is some info you might find interesting.

But before that, here is a shot of the ferry boat as it sat at the dock on the Mackinaw side...I have been trying to find an aerial photo of the miles and miles of vehicles lined up waiting to get on the ferry boat...especially during hunting season. 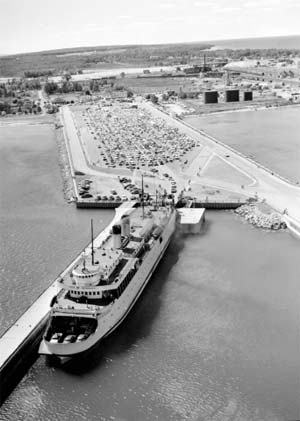 Before the Mackinac Bridge opened in November 1957, the hundreds of people waiting to take a car ferry across the Straits of Mackinac (especially during deer-hunting season) provided an economic bonanza for local residents. Most drivers stayed with their cars to avoid losing their place in line. (Although drivers who left their cars and headed into town found local residents willing to sit in the car and move the cars ahead to the ferry dock-for a price.)
More often, local residents and groups, including charities, clubs and churches, prepared or bought food and then walked along the roads peddling the edible wares at marked-up prices to the bored out-of-towners waiting in the car ferry line.
Some vendors sold food from trucks and pushcarts. On the mobile menu were such entrees as smoked fish, pasties, cheese and crackers, candy bars and snacks, plus a variety of hot and cold beverages. One fellow, with a jug of booze in hand, went from car to car with a shot glass selling drinks for 25 cents a swig. Every customer quaffed from the same tumbler.
Kids also got into the act. The local Boy Scouts sold homemade sandwiches to drivers waiting for their place on a car ferry. Mothers put tuna salad, ham and cheese, turkey, or bologna between slices of bread and then the uniformed Scouts loaded the wrapped sandwiches into Radio Flyer wagons.
Even local gas stations developed ingenious ways to refuel cars that were kept running during the cooler months to provide heat for the occupants. Long hoses--sometimes fifty feet long--allowed cars to be serviced right out on the highway.
Then came the Mackinac Bridge--and it all changed.
For more on the history of the Mackinac Bridge, look for Michigan History magazine's â€œ50 Years of the Mighty Macâ€ issue, available now. Visit www.michiganhistorymagazine.com or call toll free, (800) 366-3703.
Posted by Cathy Clementz at 3:53 PM