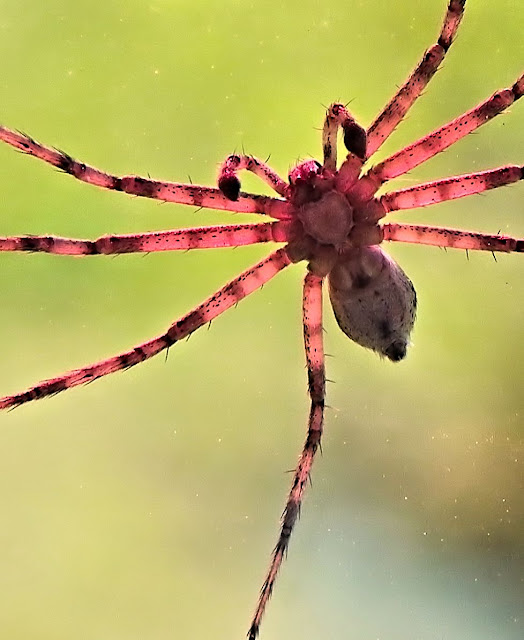 SOOOOO, what was YOUR first thought when you saw this photo???

If you are anything like me, you gave off an uncontrollable shiver and a sound something like   'BEWAAAAAHHHHH!"

I HATE spiders (and snakes for that matter, but not as much as spiders).  So you are probably wondering why I would get close enough to this hairy beast (you can see 4 or 5 of his eyes) to take a photo, right?  And I've got lots of photos of spider webs as well as the scary wolf spider.  WHY DO I DO IT?

I don't photograph snakes unless they are dead or are behind glass, and even then I'm feeling pretty iffy about it.

I was only about 2" away from this unknown spider, BUT he WAS on the other side of the window.  I have no idea what kind he is and I don't really care to research it because that would mean looking at OTHER photos of spiders.  So, if YOU have a guess, please post it in a comment.

And about snakes.....THEY can make me walk like a drum major...high stepping, arms crooked and flailing like mad.  And they can also make me swear like a sailor.  I did this just the other day.  I almost stepped on that slithering asp thing as I was taking my speed walk.  I had enough momentum in my step that I ALMOSSSSSST (the SSSSSS is for the sound snakes make) stepped on him.

O M G!!!  Have you ever stopped a step MID way thru it??? ONLY to try to bring that foot down WELL on the other side of whatever was causing you to try to stop that step in the first place???  I managed to miss that snake (which was a harmless garter snake, or is it garden?  I've heard it both ways) AND keep my balance (hence the crooked and flailing arms) and maintain my forward momentum.  By the time I came to a screeching halt, which I thought should have been well past the snake but was only just about 6" away from him, all I could say was "#$) DAMN~~~  SON OF A %(^*&!"  And after that I even blurted out something I don't ever recall saying in my life..."Holy Mother of God!"  I'm not sure where that came from, I guess just one for good measure that didn't include swear words.

Then it was a Mexican stand off...he laid there "harmless" as can be, and I stood there afraid to make any sudden moves.  I didn't even think "Gee, I wish I had my camera!", so you KNOW it was serious business for me.

He finally slithered off the walkway a bit, which meant he also went slithering past me.  I stood very still and waited till he'd slithered off a good 3 foot.

I AM A WIMP WHEN IT COMES TO BEING SURPRISED BY SNAKES!!!!  How about you???