I'm still rambling about every nook and crannie in our home, all the places I could have stashed photos when I was still using a 35mmSLR, before the days of digital...the days when you really had to work to get a good photo, and whatever  you saw was what you ended up with...no frills, no way to make it better once you got it back from the processor.

I had MANY rolls of film I was totally disappointed in, so I KNOW those photos I threw away.  But I'm slowly piecing old vacations out west, and to Nova Scotia, etc together and scanning them to the computer.  And believe me, they SHOW every little imperfection there is!

But the photos I'm posting here today have nothing to do with that.

A couple of posts ago, I told you about Nick, the Husky, and his big sister She-ba and how she tolerated him.

When he finally grew up and after She-ba was gone, he was still a squirrely kind of guy.  As I said, Huskies are fiercely independent and sometimes become deaf when given commands.

He loved to sing when I played the harmonica.  Or maybe he didn't love it as much as I thought he did.  BOY could he hold a note.  I've never seen a dog with the lung capacity he had.  He finally got so if we asked him to sing (and we weren't playing anything musical), he would sing on command.  If you told him to sing softly, he would take it down to almost a dog whisper howl.  Hard to explain.

Nick loved people and he just assumed everyone who came here was here to see him...and he made sure they DID see him.  He would talk, and talk, and talk till they paid attention to him.  He especially liked little people...kids in other words.

So, I played a trick on him one day.  He'd been out in his yard, and I brought in the antique highchair (any body want to buy it??) and an old doll that had been Dan's mothers doll.  I set it in the dining room, and you can see the result here.... 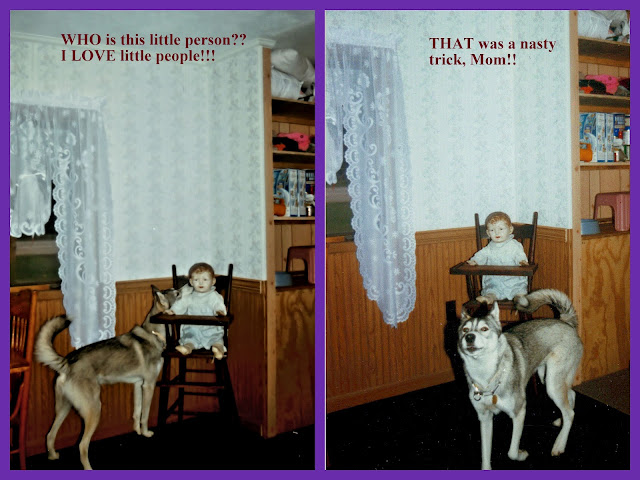 You can tell by the 2nd photo he was talking to me and feeling slightly embarrassed!  AHHH. what entertainment he was.  My daughter always called him Mr. Personality.
Posted by Cathy Clementz at 7:14 PM