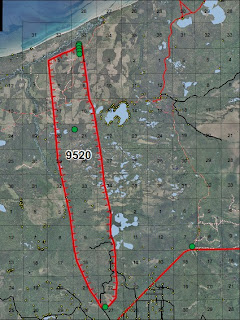 Duck Lake Map For Luce County Fire -  Pike Lake is in section 15 and 14. Fire origin is the green dot in section 27.


The Department of Natural Resources has reported (as of 10 p.m. Thursday) on the fire that is currently burning explosively in the Two Hearted Zone Dispatch Area of the DNR’s Newberry Management Unit in Luce County. Fire behavior has been a fast-running crowning incident that has consumed an estimated 9,526 acres.
This is a lightning strike-caused fire in an area where access is difficult. Detection and initial attack occurred shortly after 4 p.m. on Wednesday, May 23. Containment efforts were halted after dark, with plans to resume in the morning. Strong winds and high temperatures the next day (May 24) enabled the fire to escape, build, and – with the highly flammable fuels involved – evolve into the current situation. The primary fuel feeding this fire is jack pine.
This event triggered an evacuation of the homes and camps on Pike Lake. Evacuees were sent to a shelter set up at the Newberry Youth Center and have been supported by the Red Cross. At this time there are no injuries or accidents related to this incident.
The DNR has committed the following equipment to the suppression effort of this fire:
Six tractor plows;
One D 5 bulldozer;
Seven wild land fire engines;
One marsh unit;
One skidder fitted to be a plow and a water unit; and
40 personnel.
In addition, the Bay Mills, Newberry Village, Portage Township, White Fish Township, Superior Township and Garfield Township provided support.
A related incident, the Pike Lake Fire, broke out on Monday, May 21, around 3 p.m. Suppression efforts on this fire had it contained at 22 acres late Monday evening. Mop-up efforts to extinguish hot spots continued through Thursday until the crew working this incident was forced away by the advancing Duck Lake Fire.
Posted by Cathy Clementz at 7:34 AM