The word for wisteria in Latin means WORK.

Even though the flowers are beautiful and smell like...well, like nothing I've ever smelled before...the fragrance is amazing!  It is as beautiful as the flowers.

However, as I've told you,the plant itself has become a nuisance plant in many places.

Dan and I were out today getting our last photos for the refuge and we were in search of some of the cemeteries we had yet to find.

We cut across on a refuge road that is gated off to the public.  The drive was beautiful!  It was a canopy of trees and the green color of the ground plants almost hurt your eyes.

Dan and I felt that much of this area had been homesteads.  After you are here for a while, you can look at all the property and pretty much figure out if some of it had been a homestead...mainly by the land being cleared off and nothing but grass, wisteria and yucca plants overgrowing each other.  Sometimes you may even find a chimney or old cemetery.

Some of the old cemeteries are just field stones "planted" upright at the head of the grave.  Some of these graves are sunken so you want to tread lightly in certain parts of the old family plot.

While on this road, Dan noticed a HUGE wisteria vine off about 100' from the road.  We decided to go back and look at it because it WAS so big.  On our walk we found remnants of an old home.  The only thing that really was "photographical" was what is left of the chimney.  The growth of the plants made it impossible to see what "lies beneath".  You have to be careful of not stepping into an open well pit.  (The refuge believes that they have all the holes filled in, but they can't know for sure)

Here is a collage of a few of the things we saw on this drive; 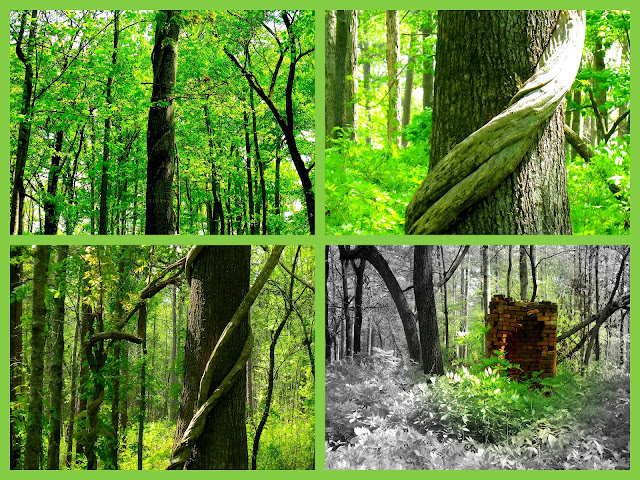 If you look closely at the first photo you will see marks around the tree where a wisteria vine HAD been and had cut into the tree.

The 2nd photo top right gives you an idea of how large these vines can get.

The 3rd photo, left bottom is another tree that has a vine growing around it as well as that vine reaching over to another smaller tree and wrapping around the small tree as well.

The 4th photo is what we could see of the remaining home.

And the photo below is what you find for a stream crossing on the refuge.  There are many places where you actually cross a stream bed or a river bed.

There is one place in particular that we went thru last week with an S-10 and I was afraid that the engine would stall out.  As we went thru' the water crossing, the water came up over the hood of the truck.

I wasn't concerned we would drown.  The water wasn't that deep, but it sure would have been embarrassing to have to radio for help!!! 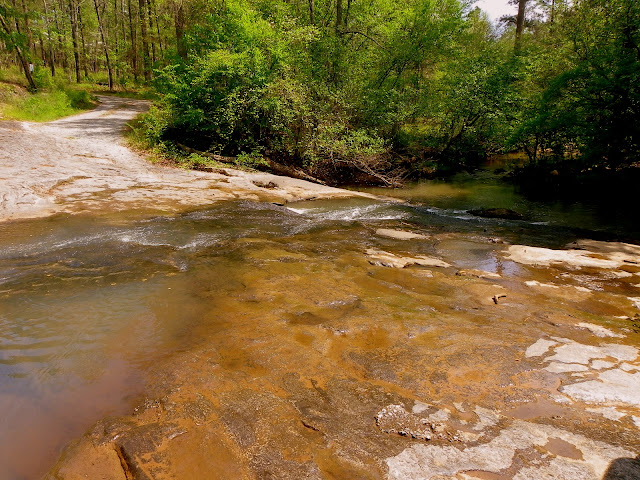 Posted by Cathy Clementz at 8:12 PM