We purchased a better printer for our office.  I've never had one that did anything except print.

But NOW I can scan old photos, I can make copies!!!  I rule the domain of my office!!  I can even email from my printer, but I don't know why I'd want to do that.  Haven't figured out a reason for that yet.

Anyway, I've been having fun scanning in old 35mm photos (not slides, photos).

The following photo is a shot of two of our dogs taken close to 17 years ago!  WOW!  She-ba (the white dog) was a Samoyed and would get along with anything and anyone...including her new "brother" Nick, the little Husky.  I think Nick was about 4 when we had to have She-ba put to sleep.  She was about 14.  Poor old girl had had LOTS of health problems.  One of them was having to have her anal glands removed, which eventually led to having her big white, curled up fluffy tail removed too.  Then she looked like a little polar bear...and it really was cute when she'd try to wag her tail, all she would succeed in doing was wagging her butt.

So, here are two of our best friends; 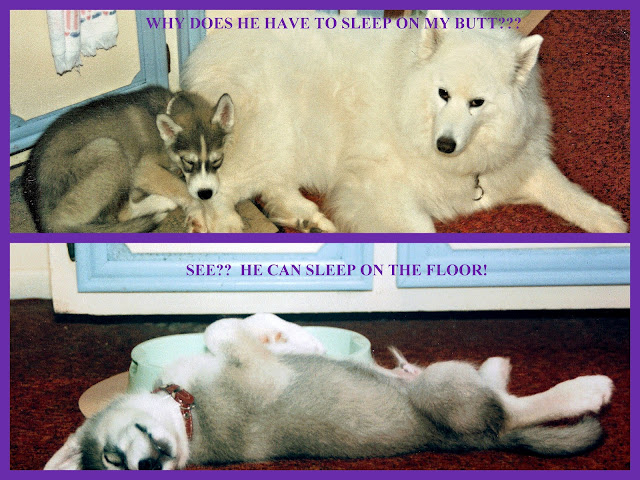 For anyone who has not had the joy of raising a Siberian Husky, it is about like raising a know it all 2 year old who never seems to get a mind set any older than a 2 year old.  They are stubborn, strong willed but have a heart of gold.

She-ba was very mellow and laid back.  All that was "wrong" with her was her health problems and she couldn't help that.  She was so mellow that while she would be laying out in the sun, birds would swoop down and get beak fulls of her hair for their nests.  Even NICK would come flying by her and grab a mouth full of her hair.  But he was so quick and took so much that by the time she was able to get up to chew him out, he was gone in a cloud of She-ba fuzz.