In a little over two weeks, we will be saying our good byes to all of those people here that we have become very fond of.

Nathan, Erin (his wife) and Anslee (the baby who turned 1 year old this month) were just over to visit.  They live on the refuge too in a nice little brick home.  It hit me how hard it will really be to say good bye to all of these wonderful people.

But at least we know, next October we WILL be back, even if it is just for 3 months.

We have learned so much from each and everyone of the people on the staff.  They have all been glad to share their knowledge and their wisdom and jokes too.

I still have a few people left to take photos of and put on my blog, but I do have one that I can put up right now.

Tom is the main LEO on the refuge and he does have his hands full.  The stories he can tell, the excuses he has heard, and the things he has seen on the refuge would amaze  you.  He is a dedicated LEO.  Works many, MANY hours.

The "joke" behind the photo of Tom;  Dan and I collected mainly beer cans off the wildlife drive.  I say mainly beer cans because there were hardly any pop cans or bottles.  We did this twice; the first haul was about 225 cans and the next haul about 10 weeks later yielded about 170 cans.  He has tried to catch people littering on the refuge, but lets face it, getting the real law breakers is a lot more important than someone illegally drinking on the refuge and then throwing the cans/bottles away.

I figured there must be a designated driver because most of the cans are on the passenger side!

So, here is Tom, the refuge LEO...(BTW, before govt cutbacks, there use to be 11 LEO's).  I DID add the ice cream to his hand.  He HAD been holding up hand cuffs! 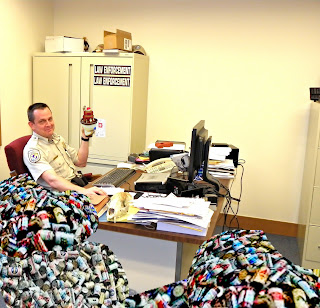 Posted by Cathy Clementz at 7:58 PM