A GREAT SEND OFF

Today there was a luncheon (bring a dish to pass) at the refuge in honor of Bev and Tom (the other helpers) and Dan and I.  SO MUCH GOOD FOOD!!!  Everyone was able to make it and everyone made it so enjoyable.

After the luncheon, the 4 of us were surprised with very nice certificates of appreciation and we each received two different award pins.

And we two couples also received new 4" paint brushes which had been dipped in paint and dried.  .Dan and I got one with yellow on the the end of it (for painting all the boundary trees and our jeans and other assorted clothing as well as getting paint on anything we touched).  Tom and Ben received one with silver paint dried on the end for all the gate and post painting they have been doing (97 gates).  Bev was beginning to look like the tin woodman....

Afterwards, we all went outside for a group photo.  I had thought about bringing my camera and having someone take a photo, but then someone would be missing from the photo.

BUT they were way ahead of us on this thought.  Nathan's wife, Erin, took group photos.  The 4 of us wanted to make sure that someone would email us at least one of the photos, but they did better than that; they had photos made and put in a frame!  They brought the photo over tonight.

So, I only have two other people to introduce you too.  I didn't get to know Andrew (the Refuge Manager and also law enforcement) and Jake (the LEO that mainly works at Bond Swamp Refuge) so I didn't doctor up this photo. 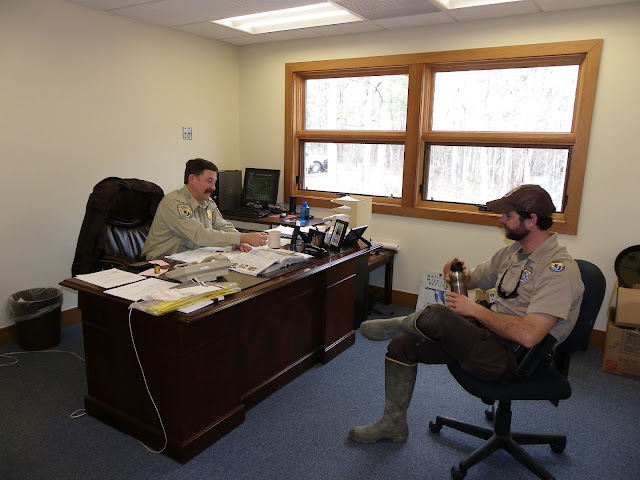 We have been blessed to have had the opportunity to have worked here and look forward to returning in the fall.
Posted by Cathy Clementz at 8:03 PM