NOT THE WAY TO SPEND THE DAY

Yesterday, we took Bubba, our truck, to Macon to the Dodge Jeep dealer for an oil change, tire rotation, and to have them thoroughly inspect the exhaust system.  We thought we'd be there about 2 hours; it was more like 5.

Seems like we have spent MANY hours there since coming to this area.

You may recall that we have had this awful smell in the cab of the truck and you could smell it outside as well.  One of the first things that we had to have done was replace the water pump.  Then it was the EGR valve.  All of these things "went wrong" since the last oil change and another new turbo that was put on back home in Newberry prior to us leaving.  This was turbo # 3 on this truck.

When we got the truck back from the dealership in Newberry in October, we thought the reason we had that smell was because they had just worked on it and the fumes would eventually wear off.  Then on the way down here, we thought the strong fumes we were getting were from OTHER diesel trucks pulling in a long side us when we'd park someplace.

Once we arrived here and got our new home set up, we weren't on the road that much with our truck, but we were on the road enough to know something was wrong and it WAS us.  So THAT started the search for where this smell was coming from.

The first time, as I said, we needed a new water pump because of the dripping antifreeze...THAT was the smell (combined with diesel...getting to that in a moment)  We felt that might take care of the issue...nope.  Next time we went in and the smell was stronger, it was the EGR (or is it ERG??) valve that had to be replaced.

Thankfully everything was covered under warranty, but one would think it would have been found when it was in for service in October.

We've still had the smell of diesel fumes; over powering make you sick to your stomach, give you a headache smell.  And it was getting worse.

Yesterday the problem was found after asking them to thoroughly check the exhaust system.  There were two major things wrong; one is a piece of the system which from what we can gather is something that lets the oil pass thru the system (truthfully, I'm just going by memory and my memory isn't too good) and this thing was totally closed!  It was crimped shut!!!  THEN the exhaust system where it fastens on to the header wasn't even clamped shut!  The diesel mechanic yesterday had to put more than 40 turns on that thing to even get it closed!  It's a wonder something didn't fall off from that $11,000 exhaust system!

All of this was documented and will be sent to Chrysler and from there supposedly to the other dealer that did the original work.

For you people out there that know diesel engines, I'll include a photo of that clamped totally shut piece.... 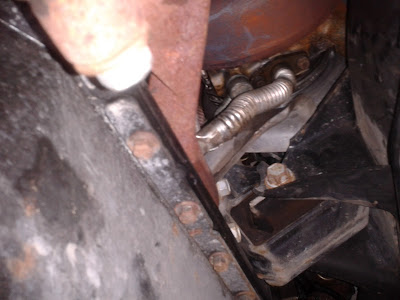 So, tomorrow afternoon, we have to take our truck back, they will give us a loaner so we can come back "home" and then Tuesday they will put on the part.  We will go back Tuesday evening and pick it up...and HOPEFULLY, FINALLY, IT WILL BE FIXED AND THERE WILL BE NO MORE WORRIES OF PASSING OUT WHILE GOING DOWN THE ROAD!!!!
Posted by Cathy Clementz at 8:23 AM