ARE WE LOSING OUR MINDS???

HEY!!!  I'm going to surprise you tonight.  This post isn't going to be one of a complaint against a company, or talking about smoke, fire, scraping bark (or maybe I haven't told you about that yet???).  This post is going to be about how I think OUR MINDS are getting old...

Example; I decided to make 3 loaves of my favorite pumpkin bread in our Easy Bake Oven (AKA RV oven).  I mixed my wet ingredients and sugar together and then in a different bowl mixed up the dry ingredients.   You know; the flour, the spices, the baking soda..BAKING SODA...BAKING SODA.

I already had everything in the dry bowl except for the BAKING SODA so I got it out, measured out my two tsps and put the BAKING SODA away....only to realize I'd gotten out the darn corn starch!!  ARRGGHHH!!!

I knew which side of the bowl I put it, so then I tried to dig  out what I hoped contained two tsp of corn starch (along with some flour I am sure.).  I managed to get the correct BAKING SODA put in the dry ingredients and proceeded.

The pumpkin bread turned out quite moist and tasty, so must be I got the starch out or it just didn't matter.

Then there is Dan...

We had to make a mad dash to Gray to the Post Office on our lunch hour.  We normally only take 15 minutes instead of an hour, but not the case today.

Gray is about 15 miles (or a bit more) from us.  When you come into town you come to a very weird intersection and to top it off railroad tracks run through part of this intersection.  Lots of signs and signals.

Dan came  up to the intersection in the right hand lane.  We had a red light but since we needed to make a right hand turn, and traffic was clear I asked him "Why don't you have your turn signal on?"  I figured he was going to turn SOON.

His reply was "I KNOW what I'm doing and I know where I am going.  Trust me."

Words he has been eating for a while today.

I knew he had not been to Gray to the Post Office without me at any time, so I couldn't figure out WHAT he was doing.

I ventured another suggestion about putting on his signal so he could turn (by now the light was green).

Dan calmly replied "I've been to the dump 4 times today.  I KNOW how to get there!"

"OK, great.  You went to the dump 4 times today on behalf of the refuge, but WE need to go to the Post Office."

Then the light above HIS head came on and he realized what I had been trying to get him to do.  Poor Dan...he thought he was still at work and heading to the dump again...even though we had OUR truck.

Yep, we are losing it.

About the scraping and painting trees....

Dan is using a draw knife, which looks very similar to a tiny two man cross cut type saw (it might be 15" in length and has handles at each end).  This is used to scrape the bark, ever so lightly, off from boundary trees on the refuge.  When he gets done scraping, then I come along with some of the smelliest paint, BRIGHT YELLOW paint and a 6" wide paint brush and paint a stripe about 1/3 of the way around the tree.  Many of the trees we are doing are ones that have been used over the years and have been painted in the past, but it fades after time and then it is hard to tell whether that paint is yellow or orange.

Orange paint is used on the refuge to help identify grounds that are NOT available for hunting.  It is important to make sure hunters and others can differentiate between the two colors.

This is a very messy job but it gets us outside so that's what counts.  AND now that the spring plants are popping up, it is allowing us to see where there are a lot of old homesteads.  You may not be able to see the foundations or fences (unless you want to tramp thru bramble and damn grape vines that usually put me on my face), but you can tell they are there due to the plant life that must have been a part of the yard...daffodils, jonquils, yucca plants.  It is SO interesting to now see all of these homesteads that we didn't realize was there.  I will try to get some photos of "yards" so you can see what I mean.

We THINK we will finally be able to head to Orlando, leaving on Sunday and probably coming back on Wednesday if not Thursday.  Dan thinks he might like to go to NASA, so we may take an extra day to do that.

Well, I guess that is about it for now!  Please keep checking!!! 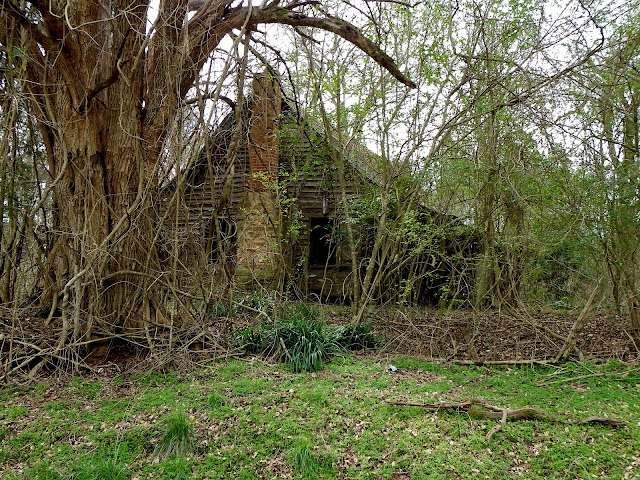 Posted by Cathy Clementz at 7:27 PM