A BIT OF THIS N THAT

It is great to be a part of the technical world again!!!  I wonder how long it will last this time?

We’ve been doing a variety of work on the refuge, but the hardest work is the cleaning around the red cockaded woodpecker trees.  (RCW for short.)  This is a LOT of work for an endangered bird.  I still think this bird must be laying golden eggs someplace and the government knows where the gold is.

Dan and I worked (or watched??) with 3 of the firemen the other day cleaning around the RCW trees.  These 3 YOUNG men could go thru the woods like they were walking on pavement.  We, especially ME, picked our way slowly and cautiously through the undergrowth and those damn grape vines that each out and trip you.  By the time we would catch up with them at the next tree, they were about ½ done with it…which was fine by me!

Nathan, Toby and Matt make short work of getting a tree ready, but they DO have a secret weapon that Dan and I don’t have and wouldn’t try to use anyway….even though it has been offered to  us.  It is like a mini-buzz saw crossed with a weed whacker.  It makes real short work of what Dan and I have been doing with loppers and firemen rakes.  If I can keep connection long enough I will try to remember to put in a photo or two of this thing in action. 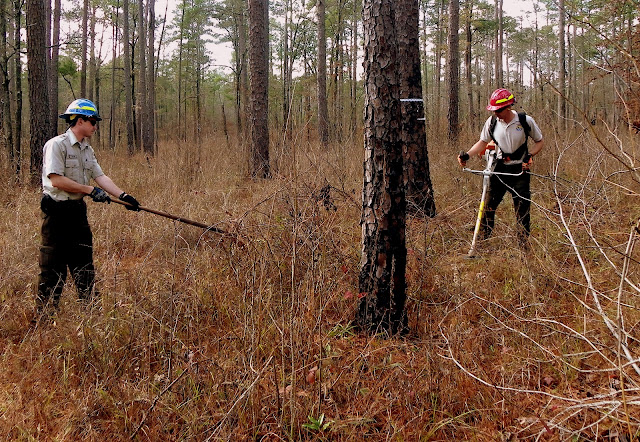 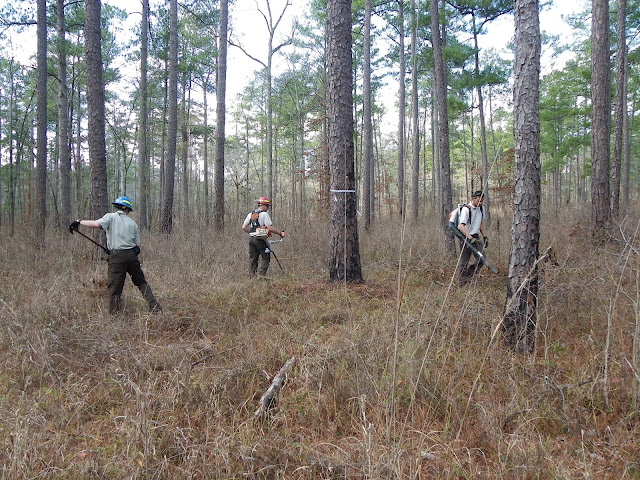 Dan and I came upon an awesome stand-off.  You’ve heard of “talking turkey”?  How about STALKING turkey??  We’re not sure WHO was stalking WHOM.  And again, hopefully I can get a photo in here!  Turkey season opens next month and Dan is putting in for the draw.  I’ve never seen so many large flocks of turkeys; sometimes we see about 50 in a flock! 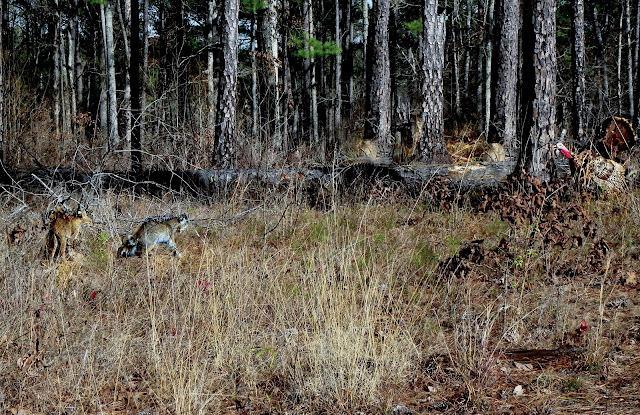 I tried to highlight the bobcats so you could see them better.  We weren't sure who was stalking whom!  This was taken towards evening, so it isn't very light.

Yesterday, we took off for High Falls State Park.  It was a beautiful sunny, but cold and windy day.  I haven’t gotten those shots off the camera yet.  The “trail” along the falls was not for anyone suffering from any bone conditions.  The “handrail” was rickety at best, but the view was worth it.

One of the other reasons we went there was so we could have a catfish dinner with all the southern trimmings at the High Falls Restaurant.  After our hike, we drove over to the place only to find that the restaurant didn’t open till 4:30 p.m.!!!  It was only a bit after noon!

So, we decided we’d go back to Juliette and head to the Whistle Stop Café.  We will haven’t had any fried green tomatoes.  Then we got to talking about a really good pizza.  We headed the 25 miles to Macon in search of a New York pizza place I’d read about…but wasn’t sure where it was.  I thought it was on Zebulon Rd.

We never did find that place, but found a Mexican grill…which wasn’t too bad, but we’re still after a really good pizza.
ANYWAY….
Since we were finally able to get finished with the dock and the boy scouts have finished up their projects around the RCW trail (which included a new photo blind on the lake), the refuge has closed the gate on the dam and Allison Lake is slowly filling back up.  I have been asked to document the daily progress of the fill up thru’ photos.  When the refuge “got permission” from whatever arm of the government they have to get permission from, that arm told the refuge to fill it slowly.   Hmmmm…it IS a lake that gets run off from about 7000 acres….and rain.  (But then, why should we be surprised at that???  A safety inspector for the State of Georgia, the state famous for clay ground, told the manager at the firebarn that the “red mud” around the building was a safety hazard….)

The refuge has set off one fire so far, and that was just about 100 acres so it didn’t take too long.  We weren’t a part of that, but there are a lot of acres left to burn and plans as to what photos they want are being discussed.

Guess that is about it for now; hope to get the photos up for ya!