The last two days of our work week, we walked two of the trails.  One was 1.5 miles long and the cockaded woodpecker trail was a bit over 2 miles long.

Just so ya know, that type of woodpecker is pronounced CAW-KAY-DEAD.

This was in addition to the other work we were doing on those two days.  Dan and I should have lost some weight by now!  Especially since it was so hot and we were both sweating profusely.

One of the other things we did was to pressure wash the stripes and blue painted sign off the pavement at the handicap parking area at a lake that is currently drained and "under construction".  This meant that Dan got to drive one of the smaller fire trucks to this area while I drove our govt. truck and carried the pressure washer to that area.  We used the water from the fire truck to put water in the pressure washer.  We both were pretty well soaked from the job.  But it was 73 degrees so we didn't care!

Our movie debut was actually a "documentary" of this refuge.  We were filmed bird watching on one of the piers at one of the lakes, then we were filmed walking down to a blue bird house, opening it and extracting the old nest (which will show that the refuge cleans out bird houses).  Then we were filmed (from the knees down) walking down one of the nature paths....and we kept walking and walking.  I was beginning to think this was supposed to be someone's idea of a joke!  PLEASE CALL US BACK SOON!!!  We've walked enough for two days!  Finally the guy said "Got it!"

Our first day of hunting, yesterday, wasn't anything to brag about.  We only saw a squirrel and a bird.  Down here you are able to dress pretty much in camouflage as long as you have a hunters orange vest on.  It sure doesn't seem like much orange...especially when some of the hunters are HUGE guys dressed in camo and their vest fits them like a hanky.

We aren't going out today till about noon.  Not sure why Dan didn't want to go out earlier this a.m. other than we both are still sore from hiking the "mountain sides"!

The new photo at the top was taken while we were taking the boat trip down the Tennessee River.

So, guess that is all for now!  Hopefully to have more later!! 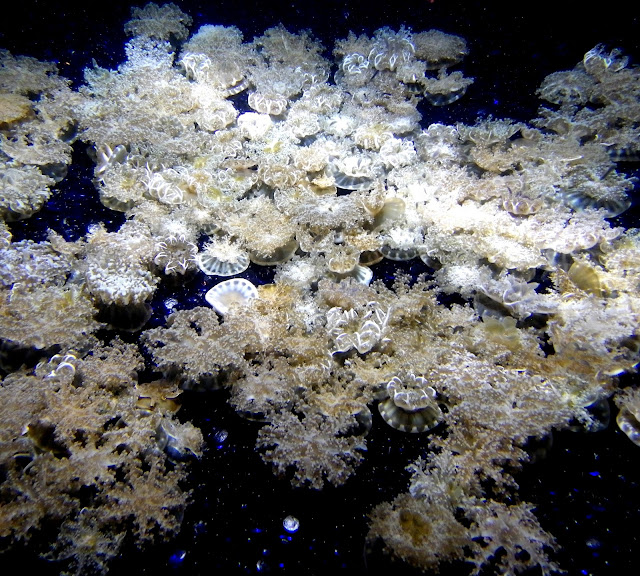 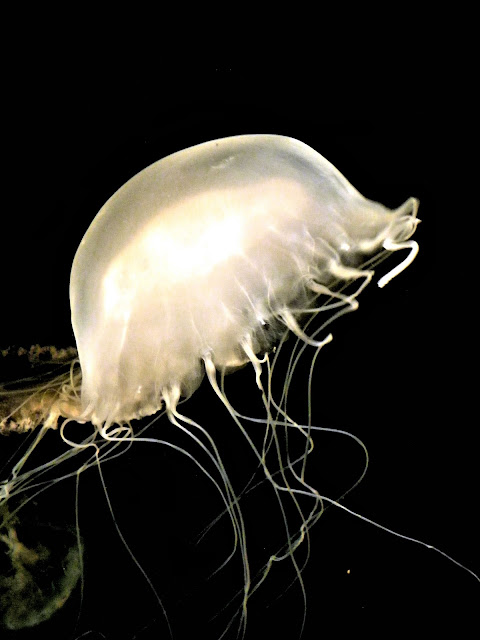 the top photos is of what is called upside down jelly fish.  the bottom is some kind of jelly fish.  taken at the Tennessee aquarium.
Posted by Cathy Clementz at 7:42 AM