GO AHEAD, MAKE MY DAY

Do you ever have days you felt you should have just stayed in bed?

Both of us felt that way this morning.  Me because once again I’ve had to swear off coffee (hopefully not for long!) and Dan because he is still waiting to hear from the VA (only been a year and 2 months).  He knew he was supposed to call the DAV today to try to find out what was going on (if anything) and going thru’ all of that always puts him in a bad mood.

So, this morning we decided to take a drive up to Monticello just to see what there was to see…there was a lot of pecan farms, a lot of railroad track and one very interesting cemetery which I could not get a photo of, but let me describe it.

Imagine an old run down cemetery and a mail box at the drive.  Yep, not sure who was expecting a delivery or even who that deliver-er was.  But it struck me funny.

Dan tried to make his phone call only to be told to call back again after 1:30 p.m.  So that upset him.

From Monticello we decided to go back to Gray to pick up some chili beans for supper tonight.  It was quicker to go that way than it was to back track and go to Forsythe.  On the way back from Gray, the alarm chimed and the check engine light came on.  REALLY MADE OUR DAY.

We headed to the office to pick up our mail before returning home.  Our part for the water heater had arrived from General RV so figured that was good news.  Only we were sent the wrong part so again we are playing phone tag trying to get in touch with the correct person to get the correct part.  He IS trying at least.  He has returned one call, but not while we were in an area we could get it.  So we called and left another message.  Hopefully he will respond yet today.

Both of us dreaded thinking what the check engine light could mean.  If you remember, before we left we had to replace the turbo on the truck as well as having the steering fixed.  While I came in to try to locate a Dodge dealer, Dan was looking at the truck trying to see what he could figure out.  The only thing he came up with was that the coolant was low (which it should not have been considering it had just been serviced, etc).

SO OFF TO FORSYTHE WE WENT ANYWAY.

He managed to find the correct coolant after only 2 stops.  From there we parked at Wal-Mart so he could once again try to call the DAV.  He even was able to make contact there…after getting disconnected 3 times.  And being told to call back at the end of the month.

On the way back home, he stopped at the “corner” store.  It is about 9 miles from us.  It is a little grocery store, meat market, gas and diesel station, beer and wine, bait store, deer processing and propane refills.  I'm not too sure but what there might be a room in the back for the drive thru preacher.

He (Dan, not the drive thru preacher) got his lottery ticket and a couple of ice cream sandwiches.  He told me I should have gone in; that there was a band playing inside and some guy with cotton sticking out of one ear was attempting to clog.  I figured he was pulling my leg.  So, I smiled into my mirror to see if I had my teeth covered in the “cake” part of the ice cream sandwich…yep, I did, so figured, the way Dan was describing the scene, that I would fit right in.

I could hear the foot stomping and pickin’ before I opened the door.  I WAS TOTALLY SURPRISED AND MY DAY GOT MUCH BETTER AT THAT POINT!

Yep, there was a group of men pickin’ and grinnin’ and one fella trying to dance.  AND I DID NOT HAVE MY CAMERA WITH ME…DAMN, DAMN, DAMN!!!

I asked how often they got together at the store and was told about once a year.  Fortunately they would be there for about an hour yet.

WE MADE A MAD DASH BACK HOME SO I COULD GET MY CAMERA!!!  I wished I could have gotten the video when they were playing Orange Blossom Special and the guy with cotton in his ear was dancing.  I've tried to upload the video I did take but it won't upload.

How can you have a bad day when you are able to take in the local culture??!! 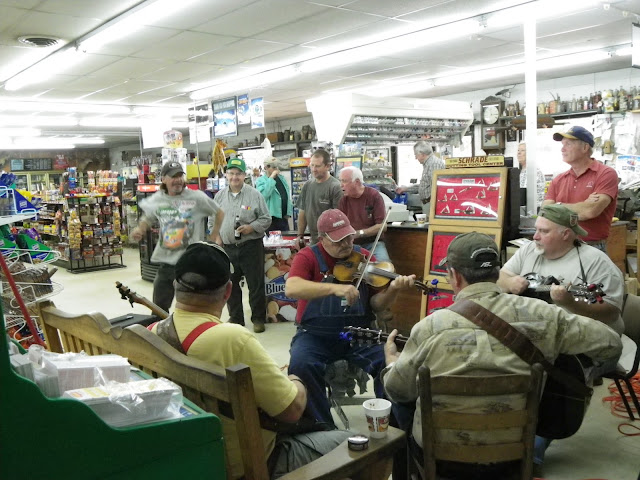 Notice the guy holding the beer??  Notice the "spittoon cups"  See the guy "dancing"?? He was having a ball!! 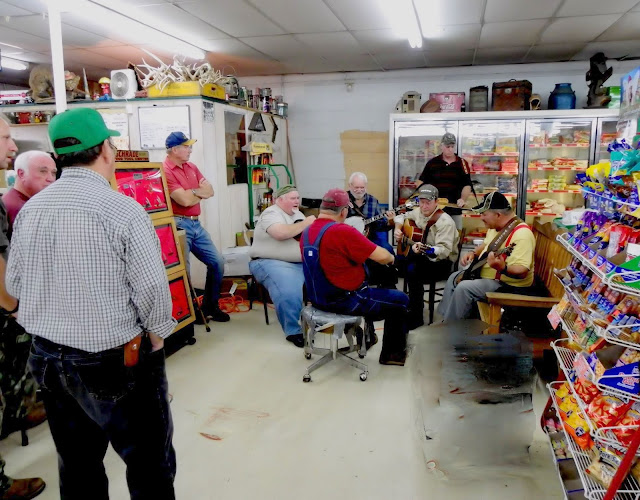 Check out the collection of deer antlers in the background.  Groceries too... 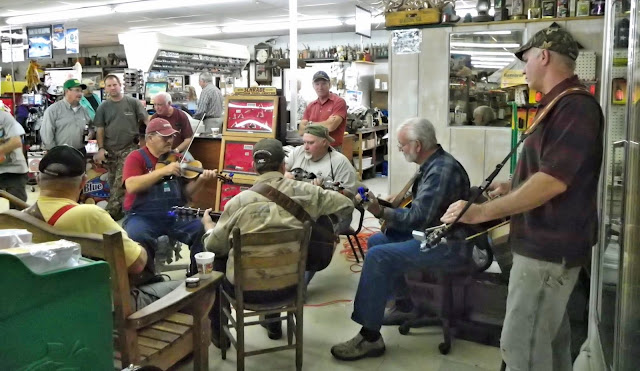 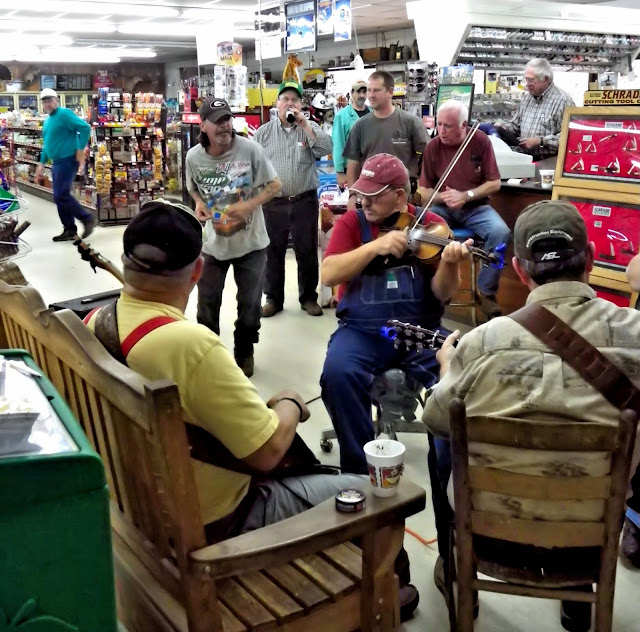 Notice the guy in the background in the "greenish blue" sweatshirt?  Yep that's Dan.  Not sure if he was trying to do the two step or was just plain getting DOWN with it.  But the cotton ball guy was really enjoying it.  WE ALL WERE!!
Posted by Cathy Clementz at 4:58 PM