Ah, the signs of spring. One of the biggest signs here is that the reservoir is filling back up. It still looks brown but every day we can see more and more water in this end of the reservoir. Soon, there will be water enough to catch the color of the sky the lake won’t look so dreary anymore.

But, there are already people fishing. We see them walking with their poles along the bank on the opposite side (it appears slightly deeper over that way). I think they open the gate to the parking lot/boat ramp that we “take care of” March 1st. We figure this must be the time that the Corp figures there is water enough in the lake so people can enjoy their water activities.

However, there are some people who just cannot wait for that.. 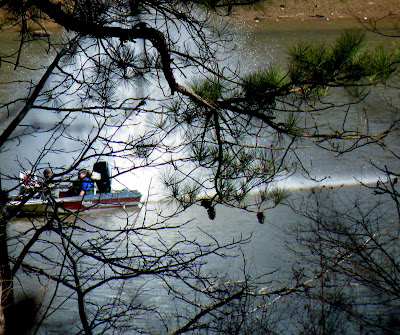 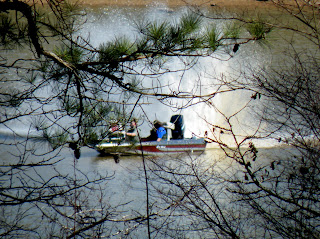 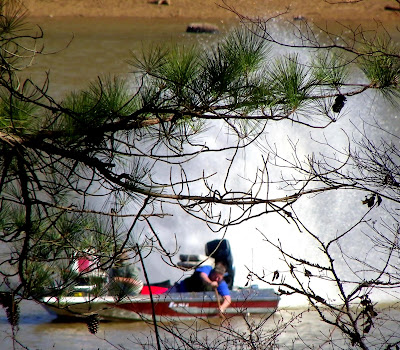 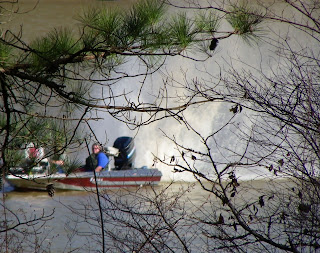 At first, Dan and I weren't sure what was going on.  We thought it was someone trying out a new motor or doing "donuts" on the lake.  But when we finally realized one of the occupants was using an oar and also saw mud flying with the water, we figured out they were STUCK!

We watched for a while to see if the could get themselves out of the predicament (of course I was watching with my camera and trying to stay out of THEIR view...I truly didn't want them feeling any worse than what they probably felt then.)

I told Dan that if that motor ever found "solid water" (instead of solid ground) that they'd be skipping across the water like a stone!

We finally saw the guy pull out a cell phone and figured help was on the way...eventually.  Since  most of the ramps are closed, it would have to be someone who had access to even get IN the lake (or what there is of it).

Eventually someone did show up with a boat, but we missed part of the activities because we didn't realize the help had arrived.  By the time we walked closer to where we could see without being seen, the help had somehow gotten a LONG line to the stuck boat.  The help boat was using oars and not their motor.

It took quite a bit of rowing and pushing off and I'm sure a few words in there like "What in the hell were you thinking?"  But they finally got to water deep enough that they could both start their engines.  I don't know how the stuck boat managed to get as far as he did without getting stuck before!

The water couldn't have been even waist deep but I don't blame anyone for not wanting to hop out of the boat and try to push off..  They would have sunk in to their knees!  Then they really WOULD have a problem!