ONE STEP AT A TIME

Friday we took off in search of a grist mill and waterfalls.


I had my directions written down and even the Net said from Point A (the mill) to Point B (the first waterfall) was only about an hour’s drive!! I figured we’d have no trouble getting in the 4 waterfalls that I wanted to visit.

The hour’s drive was slightly off…due to the fact that most of the time you could only go either 35 mph or 45 mph. What was supposed to take an hour ended up taking over 2 hours, plus we stopped for fuel and a Subway sandwich.

We finally made it to Tallulah Gorge. We had been there before and in fact had tent camped at the state park many years ago. The Gorge has a couple of claims to fame; part of Deliverance was filmed there and in 1970, Karl Wallenda tightrope walked across the gorge (at the point he walked was over a 900’ drop to the bottom).

But what really makes it remarkable is just the sheer beauty of the falls, even though for old folk like us we admire it from a far.

Neither one of us had any desire to take the 1020 steps CLEAR to the bottom (although I THINK we did it many years ago!). I’ve told you before how I have a depth perception problem (which would be a big concern on a jaunt like that, but even bigger than THAT would be fear of collapsing and falling down the rest of the steps!). Of course, if you DO reach the bottom and land on your two feet (unharmed) you have 1020 steps to come back up!

We had taken the very well maintained path to the overlooks when we came to the choice of the 600+ steps or the 1000+ steps. We’d already gone down maybe 75 steps at various points along the way.

I told Dan I just could not do it. I started down that long flight to the next landing, but I just couldn’t focus on where to put my right foot next so I was not going to chance it. Dan decided to do it and take photos with my “old” camera.

I sat on one of those gridded steps waiting for Dan to come back. I figured I would give him till 2 p.m. and if I hadn’t seen him by then, I was going for help. That gave him about 40 minutes.

I finally saw him coming back up the flights of steps, stopping every once in a while to take a break. This is not like Dan so I KNEW it had been a strenuous climb getting back that far…and he was still a ways away from where I was.

He finally got up to me and said he got some good shots so we eagerly looked at them. They did look good so I was anxious to get them on the computer when we got home. Oh, and he had taken one of me while he was on his way up and I took one of him on his way up.

We had other overlooks to hike to yet and it was slow going because Dan’s legs felt like rubber and his butt felt like he’d been doing “buttock pinches” for an hour (his description…I didn’t even know he knew what a buttock’s pinch was!!  Maybe he doesn't know and thinks it really means someone pinching your behind)

It had taken us more time to get there than we thought and we spent more time there than we’d planned on. It was going on 2:30 by the time we left and headed to 17 West to go to Helen and the other two waterfalls.

As I stated in a previous post, by the time we got THRU’ Helen and started up the mountain side it was about 3:30 and it was slow going on this road due to all the curves. And we managed to miss the turn to the first water fall that was on my list (as I mentioned previously) and we missed the 2nd one too for the same reason. They just do not give you any warning until you are RIGHT at the road where you need to turn, and there just is no way to turn around and get back to it.

So for today, I’m just posting these two photos. Somehow, and we don’t know how (I still think Dan accidentally managed to get into the menu and tapped a wrong button), all of Dan’s photos are gone. We HAD looked at them, so we know they were there, but when I went to load them to the computer, there was nothing. I tried everything I could think of, even the internal memory of the camera. They were just gone.

The only other thing I could think of (since Dan was sure he hadn’t pushed any buttons) was that the card was defective (I’ve used it quite a bit over the years). When we were at Wal-Marts yesterday picking up some groceries (and another pair of jeans, two sweaters and a long sleeved calico print blouse for me!!) we bought another memory card for Dan.

I hope this doesn’t happen ever again. For him to have walked all 600+ steps down and 600+ steps up and then NOT have the photos….he handled it a lot better than I would have! I’d still be cryinG!!!  Yes, with a captial GGGGGG!!!! 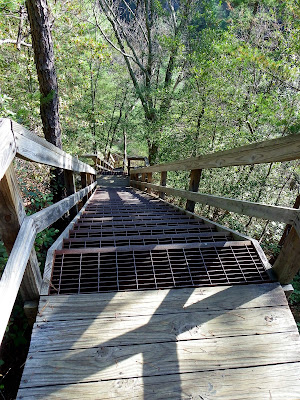 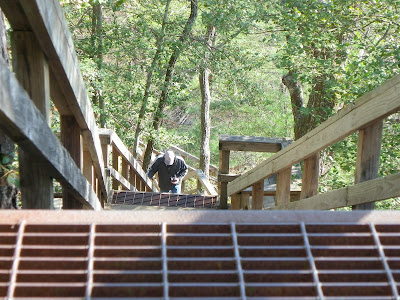 Posted by Cathy Clementz at 9:27 AM