HAPPY ANNIVERSARY IN A BIG WAY! 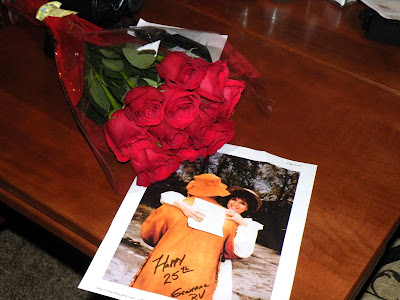 I am short on time so this won't be as "detailed" as I would like it to be.

We arrived at General RV on Monday to drop off our 5th wheel (after getting lost in the process as you may recall from that post!). We went back yesterday morning for our orientation of our new 5th wheel.

While we were having our orientation of the inside of the 5th wheel, I noticed the photo that I'd posted a couple days ago, laying on the table in the 5th wheel (only it had been enlarged). I knew Steve (the anonymous fellow) had planted it there...along with all of those beautiful roses! It brought tears to my eyes!! Dan was quite surprised too! If you notice it says Happy 25th on the photo so it was an anniversary gift to us.

I want to take a moment here to thank Ronny, the young man who showed us around our 5th wheel, patiently answering any questions we asked. He gave a very thorough tour and explained everything quite well.

There were several other people that we dealt with during our transaction; Jimmy (a sales rep), Phyllis (the paper writer) and many others that I cannot remember their names (so I apologize).

Then it came time to transfer everything from the old 5th wheel into the new one. Good Lord! I'm already dreading going home and unloading this stuff!! Hopefully in 6 months it'll just be a distant memory (for Dan it will forever remain fresh in his mind "How much damn stuff did you bring??"..silly man kept asking me questions like that).

We were finally ready to hit the road to come to Waldron Lake Campground where General RV had already made arrangements for our stay.

Since Steve wanted to make DARN sure we didn't take any wrong turns or get lost going the distance, he drew us a map on notebook paper, complete with bright red colors and ink drawings of stick men in cars (well, not really...I exaggerated a bit...he used blue AND red).

We manged to get to the park, got our new 5th wheel squared away and leveled only to find that our 50 amp cord was about 6' too short of getting to the electrical pedestal! So we hooked it back up and went to another site where the pedestal was actually at the site.

We'd already had such a busy day and both of us were on the tired and cranky side (who, us???). After some more things that went slightly wrong (and only because this 5th wheels plumbing system is a bit different from the Cougars) I told Dan that we needed to get back to Steve about going out for supper.

I called Steve and he gave me very specific directions (another silly guy...thought we'd get lost again!) as how to get to the meeting place in Brighton. We finally arrived and then we followed him to Outback Steakhouse.

The food was excellent and it was great to be able to sit and unwind with Steve. Dan and I both were totally stuffed and we hadn't even had lunch! We were very hungry when we arrived but there was no need for dessert!

As I said, I'm a bit pressed for time, so I'm going to sum this up by saying that the people at General RV are wonderful, warm, caring people. And if you are ever in the mood for an RV, I would suggest starting with them. They have several locations in Michigan as well as Utah and Ohio...and probably some that I am forgetting.

And Dan and I want to let Steve know that we couldn't have found a nicer way to have spent our 25th wedding anniversary, so thank you for being a HUGE part of it!

Posted by Cathy Clementz at 9:56 AM