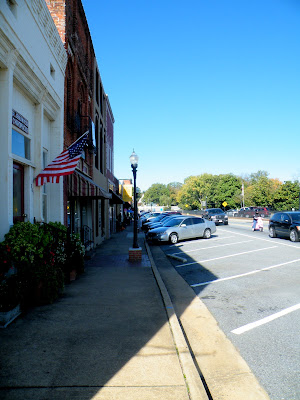 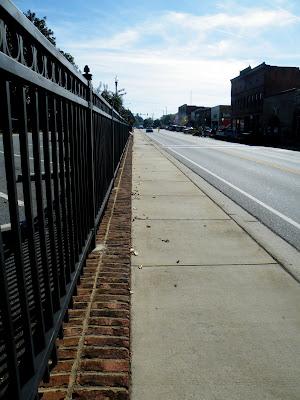 We went to the quaint town of Acworth yesterday to pick up our mysterious mail that wouldn't fit in our mail box.

Acworth really IS a quaint looking old town. I wish there had been a safe way I could have stood in the middle of the street and shot a couple of photos. 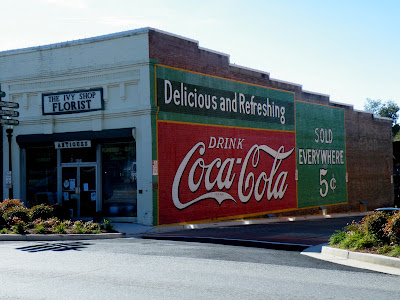 All the crosswalks are brick. At the light is the only crosswalk that has signals as to when it is safe to cross, except it is one of those that you have to push the button in order to get across. We'd never had this fun experience before (yes, my tongue is in my cheek). Dan pushed the button, very cautiously, and the thing emitted a loud beep. Dan about jumped out of his shoes...but nothing happened. So he tried again and still no success.

Then we tried to go the other way and that didn't work either. We finally just took our lives in our hand and walked across when there wasn't any traffic.

We didn't go into any of the stores, although there were a few that beckoned to me...just to go in and take photos. But I didn't know how the shop keepers would react to that.

At the other 3 crosswalks, in the middle of the crosswalk is a little sign stating that pedestrians have the right of way, so getting back to the other side (once we'd walked to the other end of town) was not an issue. We just stopped traffic by stepping out into the crosswalk.

So, not THAT put us on the side that we would need to cross at the light to get back to where we had parked.

The button for this "intersection" was about 20 feet away from where you actually would cross. Dan pushed the button and it immediately changed telling us we could cross. Before he even got back to the crosswalk, the signal had changed back to a red hand. So, he tried it again and walked a little faster to get back to where I was standing. We managed to get about 1/16th of the way across before the red hand flashed again. But at least the people in cars let us go on through. It is kind of a strange intersection because about 20' from where we crossed is the RR tracks. Cars turning into this intersection don't have much space before they are on the tracks.

We got in the truck and went to the PO (which is not part of the historic downtown district). I hoped someone had sent me a bag of Brach's chocolate stars because you can't find them down here! We tried last year and couldn't find them in N. Carolina OR Texas. The mail was just the weeks accumulation of mail that OUR PO in Newberry had sent to us. No onions in the box (as one reader had suggested there might be).

BUT I DID find those missing onions yesterday! I finally got out the little flashlight and looked at the shelves (again) under the kitchen sink...and there they were in a little white basket that had bounced all the way to the back of that cupboard.

AND I solved the problem of the weird burners on the stove...the two that only have one speed...HIGH. I bought a 12" electric skillet. Just had to rearrange things once again to find a place to store it!

Posted by Cathy Clementz at 8:57 AM