THE FOLLOWING INFORMATION IS FROM FOX NEWS YESTERDAY;

" We're just about two weeks away now from the first day of summer though there will be no summer. In fact you may not be able to enjoy the summer and all that's because of an apparent link between thunderstorms and lower temperatures that could keep folks in the cold for the whole year.”

THAT is what a weather expert said on FOX News yesterday. He had a weather map that showed many states, including the plains, of not having a summer. Michigan, Wisconsin, Indiana and Ohio are in that map SHADED IN BLUE…TO REPRESENT COLD!! I believe Kentucky may have been included too.

So, in other words, according to this fellow, summer has been cancelled for many states!

AND to top it off, he says that (and I get mixed up here so bare/bear??? with me) that La Nina, or is it El Nino, or is it the Santa Maria or the Pinta…anyway, one of those is already “setting up’ to make a cold winter for states who normally don’t HAVE a cold winter. THAT INCLUDES NORTH CAROLINA WHERE WE ARE GOING WITH THE INTENTIONS OF ESCAPING WINTER!

I personally predict that at this rate, before we even head south I will have to buy more long underwear because they will be worn out from having been used for 11 months out of the year!

I guess the ONLY good thing with this “no summer” is that with the amount of rain that we have had the Great Lakes should be gaining what they have lost over the past several years AND IT HAS BEEN TOO DAMN COLD FOR MOSQUITOES TO BE MUCH OF A NUISANCE!

But I guess even that has a downside; with the economy in the toilet (remember, our government is now so desperate for money that they are going to tax farts), if people don’t have to purchase OFF by the barrel, that company could be laying off employees before you know it.

The following photos help explain how dandelions get from point A to point B...pretty soon there will be a tax on bird droppings.... Since we aren't expecting summer anytime soon, I just MAY remove some more screens so I can get better photos of the hummers at play! 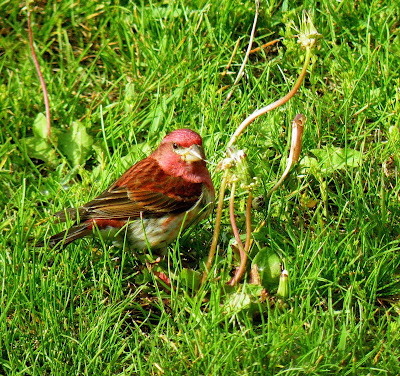 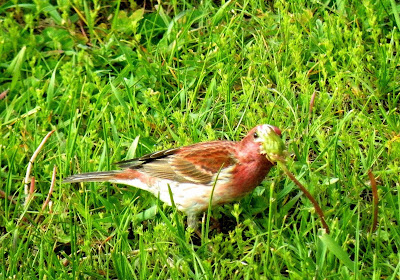 Posted by Cathy Clementz at 6:46 AM