BIRDS OF A FEATHER

Dan and I have 110 days till we will be snow birds.

For those of you not familiar with the term snow birds, loosely translated, it means a person with an adequate amount of common sense who knows when to leave the deep freeze of the north and head southward. The snowbird will head homeward when either a) the snow has melted in his/her neck of the woods or b) the first mosquito of the season has been spotted (which does NOT necessarily mean winter is officially over).

I fear that Dan has been taking the expression “snow birds” a bit too seriously. This is what I found on his side of the bed the other morning after he got up and into the shower….and we don’t have a feather bed. 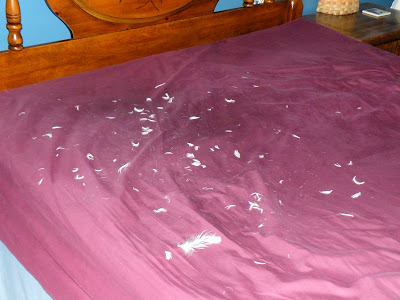 While Dan was in the shower, I asked him if he was molting or had he taken up voodoo and performed some ritual in preparation of us becoming snow birds. Dan apparently heard the words as “moldy” and “hair do”, because his response made no sense….something along the lines of “use strong bleach around the knobs and the caulk” and “I’m keeping my hair shaved short this summer”. I guess it is hard to hear with shampoo in your ears.

I left the collection of feathers on the bed and went back to the kitchen. I knew when Dan got out of the shower and had the soap out of his ears, we could talk further about the feathers.

Dan was headed for the bedroom and I was waiting to talk to him (or at least sneak down the hallway and see if I could hear any words that sounded like a voodoo spell). What I heard was the following: “What in the hell is this? Where’d all these feathers come from? You got that headless chicken in this room?” (See post of a couple days ago regarding PBS for explanation of headless chicken).

I went to the bedroom to ask more questions about these white feathers. After all, they were all on HIS side of the bed, so they must belong to Dan.

Dan was at a loss to explain how those feathers got on his side of the bed. He said they were NOT there when he got up and went to the bathroom. Well, there can only be one other explanation! Dan was sprouting (get it; baby birds sprout feathers, right???!!!!) into a Super Hero!!!

In the meantime, Dan had sat his still damp, naked self down on the bed to get dressed. Yep, you guessed it; some of those feathers stuck to his little damp behind. Dan doesn’t mind being the butt of a joke (there I go again; butt of a joke; feathers on butt, HA!) but the fun was about over when this happened…but he WAS beginning to look more like an emerging Super Hero with those white feathers on his hinney.

So, I finally had to explain to him what had happened…

We both have duck feather pillows. I was stripping the bed that morning in order to wash the bedding. When I took Dan’s pillow out of the case and pillow protector, a Muscovie duck fell out of his pillow protector. Not really, but there were enough feathers that the Aflac duck could have created a new buddy. And yes, some of those feathers really DID stick to his little damp behind!

Posted by Cathy Clementz at 7:37 AM