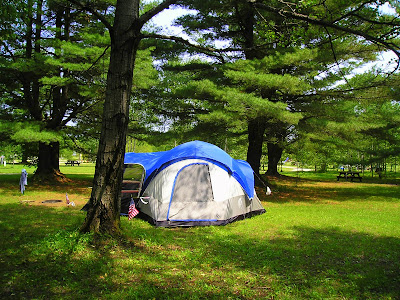 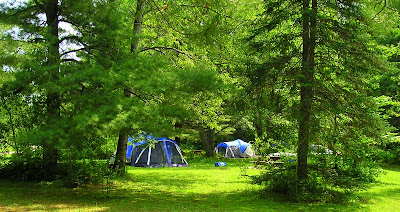 The past couple of days we’ve been cleaning out fire pit rings and taking out poplars that are getting on the dead side. Today, we hope to be able finish cleaning up the brush, getting the big roots and stumps out of the way and filling in holes. We still have tree trimming to due and both of us hate picking up the brush, but ya gotta have 15’ clearance on sites and roads for the “big rigs”.

We also have a beautiful white pine tree in the tent sites that a pileated woodpecker has had a field day with. He or she has made 3 HUGE, deep holes into a very large limb. They are so deep that it has caused a split in the limb so for safety sake we will have to remove it. It isn’t in an easy position to remove. Dan has a limb saw that will reach 15 feet but I don’t think it has enough OOMMPPH to remove this limb. So what he will probably do is have me drive the loader while he is in the bucket and I will raise him up to the limb so he can use the big chainsaw on it to cut it off. I’m hoping there is another way around it because to do this means it could drop awfully close to where we are….and THAT makes me very nervous. Even if the heaviest part of this limb would miss us, it has a LOT of long branches that are heavy.

The photos I’m including are shots of our rustic sites. We lost a bunch of fir and balsam trees back there about 4 or 5 years ago when 70 mph straight line winds came through (we also lost 3 huge white pine trees in the park during that storm for a total of 37 trees IN the park and we gave up counting how many in the woods). It isn’t nearly as pretty as it use to be, but I’m still partial to that part of our park.

So weather permitting and muscles cooperating, we’ll be lumberjacks and excavators today!

Posted by Cathy Clementz at 8:22 AM