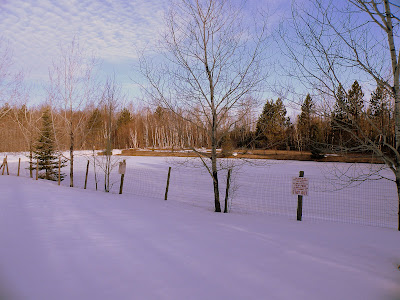 Just to show ya we still have plenty of snow. Inland lakes (and Poop Ponds!) aren't thawing very quickly. You probably are not going to believe what I'm going to tell you but I swear to you it IS TRUE....last night, Dan and I went out to the cabins to check things out. The snow has pretty much melted around the cabins where the sun hits it. There are still snow banks where Dan had plowed all winter and small banks where we'd shoveled the walk ways out to the cabins.

On the other side of one of the walk ways where the small bank of snow had melted, THERE WAS A MUSHY BLACK MORAL MUSHROOM. I kid you not. Dan said "Look that that!" I thought it was where a dog had left a calling card until he picked it up and showed it to me. It was about 4" tall. He threw it in the trash can by the cabin. HOPEFULLY THERE WILL BE A LOT MORE OF THEM!