We made it to Lake Cumberland State Park late afternoon, October 25th. The older gentleman who greeted us at the gate told us we could pick a campsite and come back and tell him “where yawl lit”. He further explained that this was one of the older parks in the system and was built way back when campers were little. He pointed out some of the campsite roads that we “probly shudn’t otter try” to go down because “oncet ya git down thar, its dern hard ta git turnt around.” And remember WE are just pulling a pop up camper!

It took us a couple of “turns” around the campground to figure out “where we’uns were gonna light”..and Dan DID have a hard time getting us turned around some of those tight corners! The sites are terrible. I hate to say that but they are. Kentucky spent an awful lot of money paving all the roads and the campsites but there are very few of these sites that didn’t run downhill or uphill or on a terrible slant. Some of them looked down right dangerous to even TRY to put a tent on. We finally found one, again, close to the bathhouse. It was about the most level site we had seen. It was going to cost us $2.00 extra per night because it came with its own “deck”…but it was worth it to not have to sleep hanging on to the side of the bed in order to not fall out.

We were not disappointed in the bathhouse; it was very clean and extremely modern. However, the water tasted like wet concrete smells…even at the campsites. Fortunately, we had purchased a LARGE jug of water at a Wal-Mart store.

We decided to just spend two nights at this park because there really wasn’t much for us to see and do in the area. Lake Cumberland IS a resort area but since we didn’t have a boat or don’t golf (well, we did play a game of mini-golf and again, ya had to watch out for walnuts!) and there wasn’t much to see, two nights was enough.

We did try to find one of the areas attractions which is called Table Rock. We even had type written directions from the Fish and Wildlife Hatchery by the dam. It sounded so simple! The rock was only about 11 miles from the Hatchery; how hard could it be?? We followed those directions TO THE LETTER and never found it. We even stopped at a gas station out in the boonies. The gal said “Yeah, I’ve heard of it, but never been thar. Ya might go back thataway and if’n ya don’t find it ask someone up thar.” We went in all 4 directions and never found it or anyone “up thar” to ask about it.


Remember that green oak wood we’d been carting around for about 6 days now? It was slowly getting drier but it still took quite a bit to get it going. And I managed to find a good “fire poking stick” while we were at this park. Ya gotta have a stick to poke at your fire in case your logs need re-arranging. What we REALLY needed was an AX, not just a hatchet! The walnuts were pretty much off the trees so it was safe to set on our deck and watch the little campfire we managed to get going. We could hear the deer all around us in the distance but it was getting dark enough that it was difficult to see them. I spooked one and he spooked me by the bathhouse…and that place was well lit up! I knew we weren’t in bear country here, but that was my first thought! 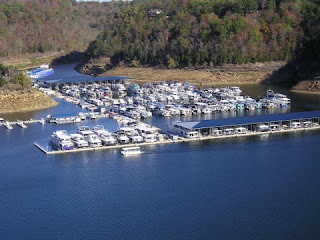 The photo above is of the marina at Lake Cumberland. There are a LOT of houseboats. 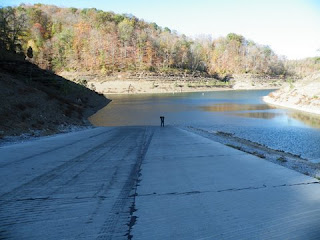 This photo is of the boat ramp. The water level is down about 20'. That is Dan at the other end. 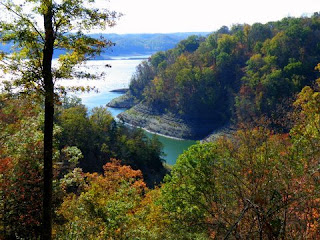 The photo above is of Lake Cumberland at an overlook we found. This was taken with my new camera. Some of the others were taken with the older camera. 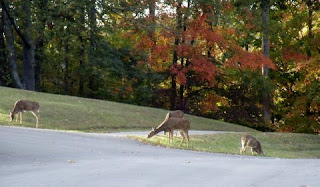 Deer not to far from our campsite. 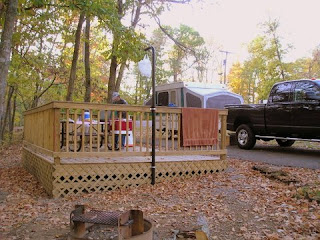 This was the most level spot we found in the park. I should have taken photos of the "dangerous" ones!