THE HENSLEY SETTLEMENT AT CUMBERLAND GAP

The next day was sunny but cold…and we were headed up the mountain on a guided tour! We had tried the previous two days to get on the tour but it was booked both the morning and afternoon. There are only two tours per day.

You have to make reservations to go on the tour to the Hensley Settlement as there is NO traffic (other than horses) allowed on this “road”. The Park service has two 4 wheel drive vans that seat 10 passengers (not comfortably) plus the driver. We were assured the brakes are checked every 10 days on the vehicles.

Before we left, the Park Ranger asked if anyone was prone to car sickness…no one raised their hand.

The Hensley Settlement is the remains of an early 20th century homestead of the Hensley and Gibbons families. They settled “up thar” because they didn’t like the modern progress that was being made “down below”. It grew to support about 100 people. The school was open till 1947! Children were about 16 years old before they ever got to go down the mountain. Mr. Hensley lived there by himself till 1970 something. He died at age 97 but by then he had come down from the homestead and the Hensley family had given the property to the National Park Service with the understanding they protect it and keep it as is.

So with all of that said, let’s continue on with our morning!

We were lucky, actually, that we didn’t get to go the previous two days because this WAS a sunny day; great for picture taking! It was cold and would be colder up the mountain so I had dressed the best I could. All the cold weather we’d been in so far, I had not developed any hives so I was hopeful.

We all piled into the trusty van and headed out. We probably went about 10 miles, I’m guessing, on paved road. We made a sudden turn and a stop on a NARROW “gravel” road. Here the Park Ranger hopped out, put the hubs in 4WD and unlocked the gate. Once we were beyond the gate and it was once again locked behind us, he radioe’d ahead to tell them we were on our way. (There are archeologists and other scientific types that stay on the settlement, doing research and “caretaking” and the radio contact between them and the groups coming up is important)

The “road” was bumpy, as twisted as a snakes back, and vertical drop offs at times…and other times straight up (or so it seemed). The Park Ranger knew exactly when to gun the engine and when to apply the brakes. There were tight turns which were also headed straight up. We saw boulders the size of battleships and I was in awe that they stayed precariously perched all these years. We saw trees with severe lightening strikes on the trunks and later learned this mountain top was like a magnet for lightening during a storm. When the weather could be “iffy” tours would be cancelled. And in fact, they were giving the last tour for the season the next day. It had snowed at the top the night before (which we weren’t aware of yet!).

We finally made it to the top and the parking area for the van. There happened to be a nice “porta potty” there which I think ALL of us made use of. From here we went on foot.

Many of the acres that use to be farmed or where the hogs were turned out to eat has grown back to the wild. The snow was light on the ground, but it was oh, so cold…and sunny.

The walk to the actual settlement wasn’t all that far from where we stopped the van. We came out of the woods and there it was. Fertile, green grass, old graying rail fences, apple trees with tons of apples still on the limbs….a true step back in time. The Park Ranger was very practiced at giving the information and answering any questions asked. His familiarity made it so much better than if we had actually TRIED to find this place on our own (you CAN hike or ride horses to it). I’m sorry to say that I missed some of his rhetoric because I was busy trying to get photos without the glare of the sun.

It was hard to get the photos I had hoped for because, the buildings were all to the east…as was the sun.

It had to have been a very hard life for the 100 people living there…summer or winter. But they stuck it out for a very long time and I can understand why. It IS beautiful. They were pretty much self sufficient, but there were farming tools that had to be transported up the mountain; sometimes in pieces to make it easier to carry. THAT is dedication.

I guess Mr. Hensley was asked one time why he finally came off the mountain (after everyone else had already left years before) and the reply he gave was “It became a might unhandy.”

The trip back down the mountain was about as exciting as going up…except it went quicker…and again we were assured that the brakes are checked every 10 days!

If you haven’t guessed it, THIS was the highlight of our trip. You may remember that we were strongly thinking about going to Cataloochee. We decided to save that trip for next fall…and will probably go back to Cumberland Gap for a couple of nights. Weather permitting we WOULD like to take some of the less strenuous hikes! Our average temp while here was about 50°; mornings would be in the low 30’s. On Friday, two days after we were due to leave, it was supposed to get back to the normal of 70°.

We are getting closer to the end of our adventure and hope you aren’t bored yet! 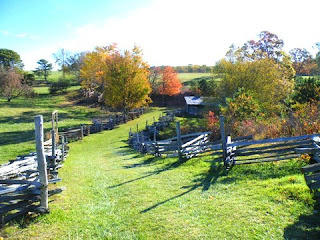 The above photo is the approach to the actual Settlement; walking past the fields. Sun directly in your eyes. 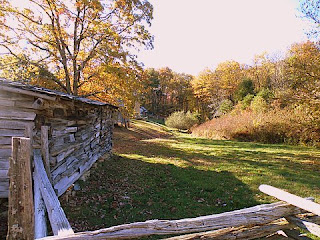 The above photo is the "work shop". Lots of old wood working tools inside. 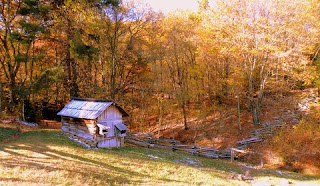 I THINK this was the chicken coop/duck barn. 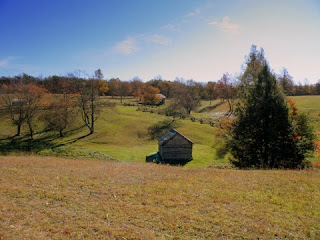 The above photo is a shot across a corner of the homestead.
I will be posting more photos by themselves later today or tomorrow.
Posted by Cathy Clementz at 8:51 AM