It was finally time to leave BSF and head for Land Between the Lakes (LBL). I thought it would be nice to take what is considered “the scenic route” across the top part of Tennessee. That is Rt. 52…and it is scenic…and curvy…and hilly…and varying speed limits at the drop of a hat.

After about a couple hours of that, I started trying to find a quicker route because at this rate we weren’t going to make it to LBL THAT day. There is NO quicker route once you decide to go across the top of Tennessee. WE should have driven back into Kentucky and got on 64 (I think it was 64). But it was too late to do that.

We finally arrived at Clarksville, Tn which is a fairly large, sprawled out town. Very confusing signage, weird intersections. We finally saw a sign for the 41A bypass. The sign also touted Fort Campbell (which wasn’t too far from where we wanted to end up). I thought we had it made…wrong.

Ya know the saying “You can’t get there from here”?? This was the place they were talking about. The bypass was someone’s idea of an engineering/signage joke. Even with a compass system that came with the truck, we were always headed in the wrong direction! And I don’t mean we were going the wrong way down a one way street. NOTHING JIBBED!

We did finally make it to LBL before dark, even got a campsite at Piney Campground and sat the camper up before dark. And it was across from the bathhouse! And not too far from the lake!

The campsites are HUGE! They are all gravel sites and I think all of the trees are walnut or oak. We were very careful about where we parked the truck and set up the camper. It is one thing to get hit with an acorn. It is another to get hit with a walnut; you could break a windshield or put a hole in your head!

The next day we went to the visitor’s center and in the course of the conversation she asked how we arrived there. I told her where we had started out from and she said, with that southern drawl, “But honey, yawl can’t get here from there!” NO KIDDING. Apparently our story was not the first nightmare trip she’d heard about, and especially coming around Clarksville. She said that by pass is a joke and “everyone gets all twisted up!”

LBL is a very historical area. There are over 200 KNOWN family cemeteries dating from the late 1700’s to the present. The park service figures there are many more family cemeteries that they have not yet discovered. Most of the ones we did visit had stones for children ranging in age from newborn to 5 years old. There were MANY of these graves in that age group. Some families still DO use the “old family cemetery”. We found a granite marker from 2004. A lot of the grave markers that you could barely read were of civil war soldiers. A lot of these cemetaries were down clay type roads...and it had been raining the previous night. Our black truck was no longer black.

We visited several of the “attractions” in LBL; things that you pay to go see. The best one is the old settlement and I do have a few photos of that to include with this story. There is also a planetarium which we both felt was a waste of money….live and learn.

Before we left LBL I got up nerve to “call home” and check in with Chuck, the neighbor and friend who was keeping an eye on things. I hadn’t had any missed messages on the cell phone so I HOPED that was a good sign…wrong again. He came down to check the furnace one particularly cold 20° morning and the furnace was NOT working. Fortunately nothing was frozen and he was able to get Colburn’s out to get it going. They didn’t know why it stopped, so at least I knew I could continue to worry about “things at home”…say, wasn’t this what we were trying to get AWAY from?? I guess the good news was no one smelled any fuel oil. 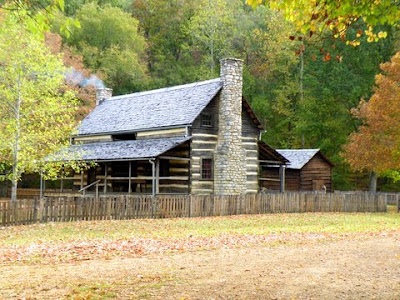 The photo above is of an old home at LBL. The park has people dressed in period clothing who are very well versed in how life was "back then" and they talk to you as if the conversation were actually taking place back then. I was impressed with the huge stone fireplace in the "living room" and asked if it was how they kept the children's rooms upstairs warm in the winter, figuring the chimney went through the upstairs. With her southern accent, while sweeping the wood plank floor, she explained to me "The chimney is on the outside of the house. We're trying to keep cool down here in Kentuck. Don't need no mo heat in this ol house." 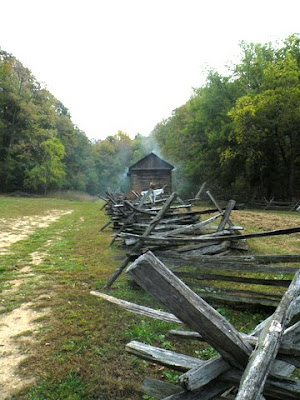 The above photo is of the tobacco barn and where they dry the plants/leaves. You can see the smoke coming out of the "roof area" of the barn. More than once in driving the countryside, Dan and I would see barns that we thought must be on fire due to the smoke coming out but after going through this old farm, we realized what those barns had been for and why the smoke. 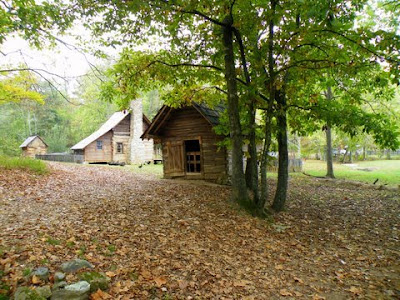 The above photo is another out building on this homestead. In the background, you can see another smaller home. 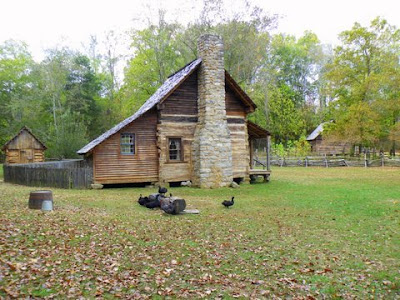 This last photo is of the other home you could see in the previous photo. There are several black ducks in the foreground. The ducks are taking "baths" in a hollowed out log that is filled with water. It was funny to watch; one would get out and another would hop in, like they were respectfully waiting their turn. Dan and I had never seen black ducks before and found out that they are a breed called Cuyooga...and I probably did NOT spell that correctly.

Over in the barn yard was two beautiful cattle; one bull and one cow. They both were resting peacefully on the ground, but even in that position you could see how well cared for they were. There was also a horse barn, but the two draft horses were shy and wouldn't come out. Actually, they probably realized that just behind us was a group of 2nd graders so they were smart in staying inside the old barn.
Posted by Cathy Clementz at 6:40 AM