THE CONTINUING ADVENTURES OF DAN AND CATHY CLEMENTZ, PART THREE

The morning arrived for us to drive to Stearns, Ky for the train ride into the gorge and into the old mining camp. It was a cloudy, windy day but we were prepared and dressed accordingly. I had my new camera and Dan had the older one.

There are 8 train cars being pulled by one locomotive. As I recall two of the cars are enclosed, two are out in the open with bench seats and the rest are “semi enclosed” and have swivel seats. We opted for a semi enclosed car, about 4 cars behind the engine. Prior to the train leaving the station, there was a “pickin’ and grinnin’” session at the station; some old timers playing a guitar, a banjo and a fiddle. Ya couldn’t help but tap your feet and smile.

The trip started on time and it wasn’t long before we found out why they told you to keep all body parts inside at all times and to remain seated. The walls of the gorge were VERY close to the cars of the train. In this part of the gorge where there normally would be rapids and kayakers, there was nothing but large, dry boulders. One of the reasons we took this train ride was to see the rapids, especially the one named “the Washing Machine”….there was NO WATER. Can you imagine the economic impact this has had to this area? There are many kayak and canoe liveries in the area. One interesting fact about this river is that it is the ONLY river in the U.S. that flows from south to north (well, when there is water that is).

(An interesting item about the Stearns Railway and the coal company is that it was started by Mr. Stearns of Ludington, Michigan several years ago. Dan thinks that the Stearns RR is on the Monopoly game, but I can’t remember.)

As I stated in a previous post, the people “down here” really get into trick or treat and Halloween. The Stearns RR has a special ride for trick or treaters and had put goblins, pumpkins and ghosts along the stretch of the trip and they take people/kids through the gorge after dark. There has been electricity run to these displays so they can light them up.

Once we got to the end of the tracks, we turned our swivel seats around because the locomotive was going to go backwards, across a train trestle and a smaller but DEEP gorge into the mining camp. I could not get a good picture of this. In fact, I used the small camera for the photos I DID take on this excursion.

The mining camp was interesting but I’m not including photos of it. You CAN drive to it (the pickers and grinners beat us there and were all tuned up and playing again by the time everyone departed the train). There is a lot of up hill walking to get to areas where the old homes use to be (it seems MOST of our walking was up hill on this trip!).

They allowed us about 90 minutes to explore the camp before boarding for the ride back to Stearns. On the trip OUT from Stearns, you didn’t really realize you were going up a grade, but it was very apparent on the way back down…the train went a LOT faster!

It wasn’t a pretty day for picture taking and as I said, there was no water in this part of the gorge, no rapids so it was kind of a disappointing trip. 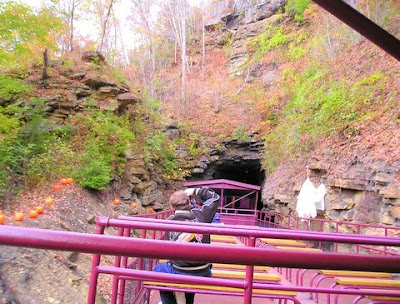 This is a shot of the train going into the tunnel. Notice the pumpkins on the left and the "ghost" on the right. 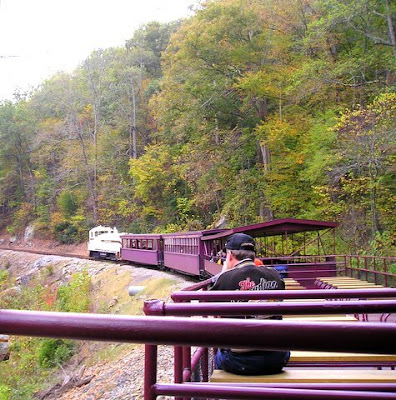 Just a shot of the front of the train. 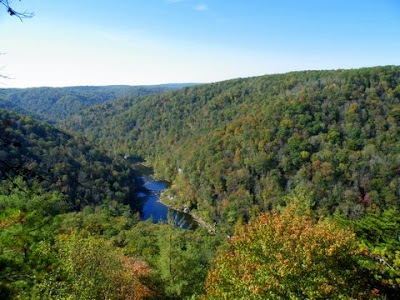 This is one of the "hikes" we took to get to an overlook of Bandy Creek...or what there was of it. Due to the hot, dry weather they'd had, the colors were not what they normally would have been at this time of year.
Posted by Cathy Clementz at 6:42 AM