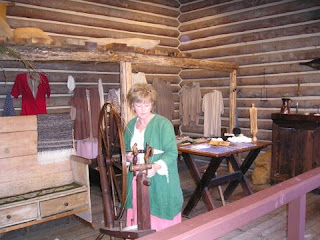 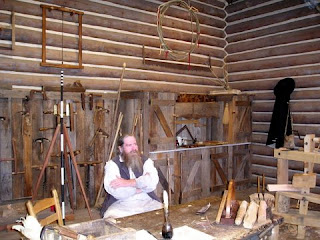 The 2nd photo (above) is the man who portrayed the surveyor and woodworker. He is so interesting. 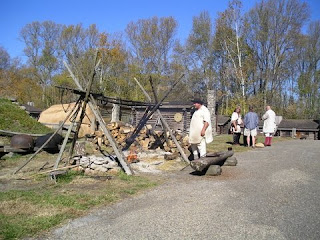 The man above, was "roasting" a large ham over an open fire. It smelled very good, but looked pretty ugly! 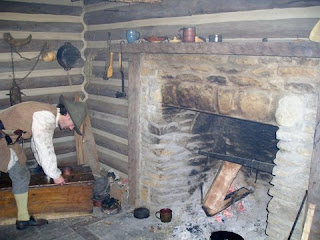 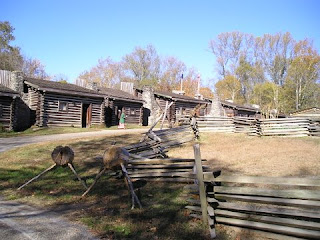 Dan and I were still concerned about our furnace problem at home and also felt badly that Chuck had to stop in and check on it every day so we decided that we most likely better start heading for home…slowly.

We headed for Fort Boonesborough, just a bit east of Lexington. This is also a state park and the site of For Boonesborough. The old fort no longer exists, but the State has rebuilt a fort that is supposed to be a pretty close replica of the original fort.

The campground is very spacious and lots of nice sites, huge clean bathhouse and NO WALNUT TREES ON THE CAMPSITES…well, not the modern sites. The rustic sites were in the trees. You probably know by now I am intrigued by trees. This park had HUGE sycamore trees (among walnuts and oaks). I’ve never seen sycamore trees that big. Dan totally surprised me by saying it was nice to be out of the woods and in the sunshine for a change.

We only spent two nights here and did take in Fort Boonesborough while we were here (they too give a 10% discount for Military or AARP). The employees dress in period clothing, put on demonstrations of what their “trade” is and try to take you back to that life time. There is a small theatre in which you see a movie (done in Hi Def!) of a reenactment of life at the fort and when Daniel Boone was kidnapped by the Indians.

Our favorite tradesman to talk with was the surveyor/woodworker. He offered to answer any questions anyone had about what he did for a living at the fort. I told him it has always boggled my mind HOW anyone figured out how to survey land, where the counties lay, etc…I mean, THINK ABOUT IT. He proceeded to tell me that an acre is the amount of land that two good oxen can plow in a day and from there he explained about chains (for anyone who has ever had the slightest involvement with land appraising or an interest in this type of thing you will know what I’m talking about) for measuring length and what 16 chains represented. He did an excellent job. The others, such as the spinners and weavers, candle makers, etc did too, but he was very thorough and you could tell he enjoyed what he was doing there….but it might have something to do with the fact he has also been a teacher in “real life”.

There is a very unique gift shop at the fort with a lot of handmade crafty type things as well as local produce that has been dried or cured as they would have done it years ago. The only thing we bought was a small “wheel” of maple sugar candy…and it did not taste like the Vermont kind of candy! There IS a difference in maple trees and the sap they produce.

Remember before how I said that “these people get into trick or treat”? At the campground of this State Park, thank goodness we missed it, just 2 days before they had a HUGE “shindig” and the 200 sites were full as well as the overflow. Everyone who camps decorates their site and RV for Halloween. And the park also decorates. A lot of that was removed by the time we arrived, but they still had all the lights and goblins on their community building. At night (we were only there two nights), they turned all those lights on and played a tape of Halloween, scary type music to go along with it. It WAS kind of cool. We were later told they had a record crowd that year of 4000 trick or treaters come through! THAT explained all the left over straw and dry hay that made excellent kindling (by now, the oak was getting dry enough for Dan to split it with a hatchet, but ya still needed “fire starter” to get it going!).

Speaking of campfires, one of the park rangers dropped off a HUGE chunk of sycamore for us. First of all we were surprised that they were allowing campfires because it was so dry (the grass was not green in most places), and 2nd we were surprised that the park would want anyone to try to burn a Yule log (that is what it reminded me of) in those dry conditions. After we got it going, we thought maybe he was pulling a prank on us. THAT thing stunk to high heaven. Don’t burn sycamore! Just admire it as a live tree.
Posted by Cathy Clementz at 11:38 AM