TAKE TIME TO SMELL THE FLOWERS

You may have wondered what I’ve been up to lately….not a whole heck of nothing. The bad thing about doing nothing is you aren’t quite sure when you are done.

Dan and I have been “watching” a cocoon since last fall that was on one of our climbing rose bushes. I’d been watching it frequently lately in hopes of watching the moth emerge and being able to photograph it as it did. Of course, THAT didn’t happen.

Two days ago, I checked it in the morning and it looked the same. I told Dan that I thought maybe the cold weather had killed it off and it wasn’t going to emerge. About 3 hours later, Dan spotted it on the rose bush!

We’ve been watching it almost hourly making it’s way up the stems towards the top. And wouldn’t you know it, the moth emerged the other day when it was raining pitchforks and stagger babies (I have NO idea what a stagger baby is, but it is something my Grandma always use to say when it rained hard. I hope it isn’t an ethnic slur. And I haven’t been able to trace it down, so it could just be something Grandma made up??!!). The bush is somewhat sheltered by the overhang of the roof so he/she wasn’t getting too wet, but it wasn’t helping him/her dry out and spread the wings.

THAT was the photo I wanted; when if finally spread the wings. I checked it again around 9 p.m. last night and it was still where it had been the past 3 hours. We were concerned a bluebird would find it before it even got out of the rose bush. This morning it isn’t there so we are hopeful that the moth took flight and found safety again. But I thought I would share my photos with you. Yes, I am still hoping to get a better camera so they aren’t the greatest shots. (If you look closely at the bottom of the first photo, you will see the cocoon.)

Catch up with you all another time! 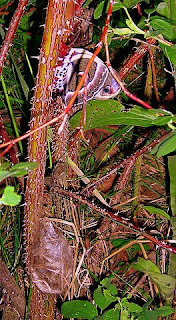 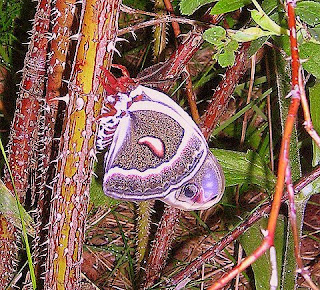 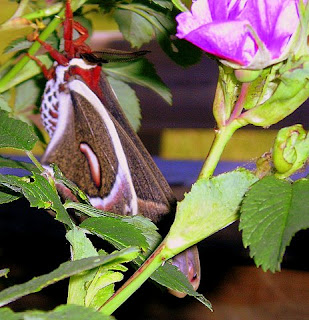 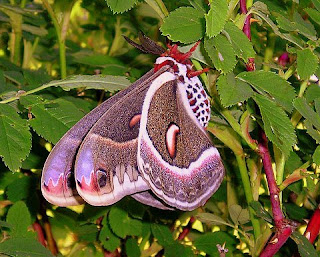 Posted by Cathy Clementz at 1:26 PM