PREPARING TO SAY GOOD BYE TO A BEST FRIEND 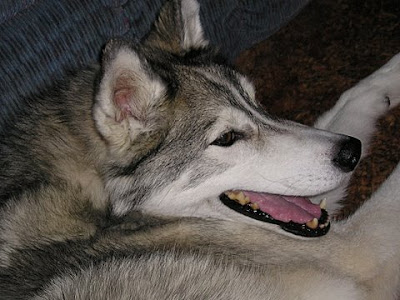 Each dog that has been in our family we felt was the best dog in the world and each dog touched our hearts and our homes in his or her own special way. They all had their own personality; their way of making us laugh or making us upset (which wasn’t often). Some were just out right clowns and others seemed like professors.

As you know, January 12, 2008 we said good bye to our sweetie, Chewy. Since yesterday we have been preparing ourselves to say good bye to our Northcountry Nick. The vet will be here this afternoon to help us allow Nick to get to his next home.

Nick came into our lives almost 13 years ago. I bought him as a surprise for Dan. Dan was not pleasantly surprised when Nick arrived here as a squirming, wired 440 Husky pup but it wasn’t but a day or two and Nick had both of us wrapped around his little paw.

I won’t go into all that is involved in raising a Husky from a pup…look it up online sometime. It is kind of like having a child who never gets out of the “terrible twos”. Even as a youngster, Nick was quite vocal; loved to talk and sing. We’ve even had campground guests who would return and ask if Nick was still with us and could he sing for them. One elderly couple video taped Nick singing so they could show their grandkids when they returned home from their vacation. My daughter, who only saw Nick (and us!) about once a year fell in love with Nick and called him Mr. Personality.

When Nick came to live with us, She-ba (my Samoyed) was about 10 years old and wasn’t as spry as she use to be. Nick’s favorite thing to do to She-ba was to come running past her (as she lay trying to sleep) and grab a mouth full of “She-ba fur” and keep running. Another activity he enjoyed was picking the flowers off from the Christmas cactus and putting them on the floor. She-ba allowed Nick to cuddle up to her for his naps…which were quite frequent for both of them; hers because she was worn out from trying to keep her fur intact and his because he was just a little squirt and wore himself out with all his shenanigans. It didn’t take long for his Dad and him to become inseparable best buds.

Nick loves everyone. He would get so excited when company came, almost to the point that we were embarrassed to have company. He thought they were here to see him, and maybe they were! After all, he was the one dominating the conversation with his talking and singing.

We’ve done all we can for Nick. We had blood work done a month ago and that was fine and we had X-rays done on the 16th. The only thing that showed up (besides arthritis) is calcification on an area that looks like it is ON or IN his intestine. This is probably why he is no longer interested in food. We brought him home that day determined to give him at least a couple of more days of extreme care before making our final decision. It was evident by Monday afternoon, that all the special cooking we were doing, the hand feeding, etc were not doing him any good. The decision was made and Dan built Nick’s coffin. We called a man we know who has a back hoe to ask him if he would dig us a 4 x 4 x 4 foot hole. He drove his back hoe a bit over 3 miles to get here to dig the hole. When asked what we owed him he said “Some things you cannot put a price on.” So a special thanks to Marty Harju.

Nick would have been 13 on June 12th so his Dad and he had LOTS of time, GOOD time together. Where Chewy was my little girl, Nick is (I can still say is because as I am writing this, he IS on the living room floor sleeping peacefully) for sure his Dad’s best bud. I love Nick with all my heart but it is different between him and Dan, just like it was different between Chewy and me than it was for Chewy and Dan.

As with any pet, this was not an easy decision but we know we are doing the best thing for our best friend, our best boy. He will be with She-ba and Chewy and my Dad (Dad and Nick loved each other and they too only saw each other about once a year). Knowing it is the right decision does not make it any easier. Dan has been very adamant that I do one thing for him (Dan) and I will do my best. Dan needs to grieve in his way, and he understands that I have to grieve in mine (which usually involves a lot of tears and sobbing). He has asked that I do not give into that when he is around. This will be one of the hardest things he has ever asked of me, but I need to do this for Dan.

So, a little over 4 short hours on this rainy day and Nick will be leaving us to find his way to others that have gone before him.

We love you with all of our hearts, Nick.
Posted by Cathy Clementz at 1:20 PM