AS TEARS GO BYE AND OTHER STUFF

I did not mean to make my readers cry or feel sad with my “stories” of our loss of Nick and Chewy. It has been healing for me to write about our beloved Nick (and when it was Chewy in January). And I think my pet people readers will understand when I say that when I wrote about Nick and Chewy, I felt in my heart that they KNEW what I was writing about them because those thoughts were in my heart and mind as I put them down on paper. So I felt they knew.

Today, Dan and I took Chewy’s dog crate and Nick’s dog crate (which he out-grew several years ago!) to the Luce County Animal Shelter and donated them. We also took a 30 pound bag of Chicken Soup for the Dog Lover’s Soul dog food and 4 cans of dog food to the shelter. It was hard for me to part with little Chewy’s crate; it brought back so many funny memories of our vacations with her. But we don’t need them any more and hopefully the Shelter can get good use out of them.

Well, now on to something a little more entertaining! As I said in a previous post, camping is off to a terrible start in the U.P. But I do have to share a story with you about one of our Memorial Day campers. 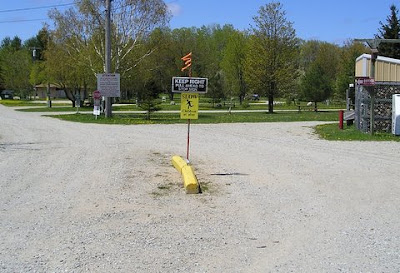 The photo with this story shows you what you see when you drive into our park. It is a pretty obvious set up; easy to see, right in plain site, right???

Friday, an older type HUGE van pulling a heavy newer travel trailer pulled in and as they were coming to a stop I heard an awful noise. I looked out in time to see the sign had been hit by their trailer. The sign was bent totally sideways and was scraping down along side of their trailer. They got out of their van, surveyed the sign and came in to register. While I was taking their info, we were talking and I was kind of waiting to see if they would say anything about breaking the sign or damage to their trailer. It was obvious they were not going to say anything about it so I finally said “Did you damage your trailer when you hit the sign?” They both looked very surprised but finally said “No, there’s no damage to the trailer. We’re first time RV’ers.”

Dan was able to repair the sign and managed to find some more carriage bolts to put it back in place. They managed to leave without hitting anything on the way out.

The other photo is of a Hawfinch! I don’t have a good digital camera (still on my wish list and they way the economy is going, it’ll be on that list for a LONG time). Well, let me rephrase that. I have a DECENT digital camera but it is a plain Jane thing with only a 10X zoom. Anyway, after researching this bird, it is NOT supposed to even be here! It MIGHT be seen in Alaska but is usually in Asia and Europe! He has been hanging around the sunflower feeders for a couple of days now. I hope he sticks around long enough to get use to my presence and maybe I can get a closer shot of him. If I can’t get a decent photo, NO ONE will believe me! 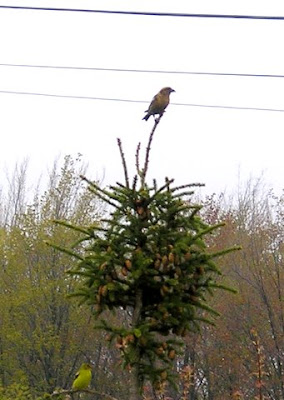