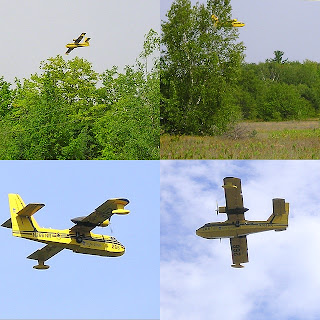 I have had to put my camera batteries in the charger and as soon as I did, these both flew over close enough to the house that I could actually see the pilot! It never fails! Right over the roof! I could look out my office window and see his face!!! But even these give you an idea of how close to the ground they are flying through here.
Here is another update straight from the DNR
Statewide Toll Free Information 1-877-261-3473

Evacuation: M-123 is closed from 4-Mile Corner to County Road 500. Evacuation is from Widgeon Road south to Murphy Creek. This is a precautionary evacuation to avoid a more rushed evacuation in the event that the wind should change or pick-up. No structures are expected to be involved unless the wind picks up later in the afternoon.

Monday Weather: Winds are currently from the NW and predicted to change to a more northerly direction later today.

Tuesday Weather: Current prediction is for SE winds; however winds have been erratic and could come from any direction.

Current Strategy 1) Construct and hold line on the SW side of the fire 2) Access the need for structure protection along the north and west sides for the fire. 3) Reinforce and patrol the east side of the fire.

Overnight humidity will damp down the fire some, but until we get significant humidity we can only hold the line to the best of our ability.

Access to the evacuated areas in prohibited at this time.
Posted by Cathy Clementz at 6:25 PM