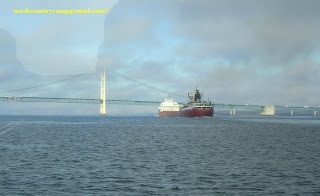 I think many of my trail report readers have always wondered how old I am, but they are too polite to ask. The ones that have met me still may not have been able to figure it out. What this “story” is about may give you a better idea.

As a kid, I remember coming to the U.P. BEFORE the Mighty Mac (Mackinac Bridge) even existed (remember, originally Dan and I were trolls). We would take the ferry boat to get to the U.P. I don’t remember witnessing any of the construction of the bridge; it was like one year it was not there and the next year it was. While the Mighty Mac IS an engineering marvel, we know that it wasn’t built in a year.

Then, one year, our family vacation once again brought us north and there was the bridge! My Mom and Dad had a very difficult time convincing me that we were going to cross it in our car. To ME, it looked like the bridge ended up in the water on the other side. We did finally cross the bridge in our car and I don’t remember a thing about THAT either. Maybe I passed out or maybe they put me in a suitcase to shut me up. But what I DO remember is that I was 5 years old…and I have been in love ever since…once I realized we weren’t all going to drown on the other side.

The Mighty Mac turns 50 this year (you can now do the math). It is still a spectacular sight for my eyes and I get a lump in my throat every time I see it. Even though I now live a bit over an hour north of the Mighty Mac, it isn’t something I get to see more than once or twice a year…so it is still special for me. I think even if I saw it every day, I would still be in awe and feel so very fortunate to have Mighty Mac as our “driveway”.

Before Dan and I moved up here in 1992, we would come up from the Lower to the Upper for deer season. We would spend 2-3 weeks camping out in the woods over by Kenton…and when we crossed the bridge to head home, I would watch in my rear view mirror and cry. If we have to make any trips downstate, neither one of us can wait to see those towers looming in the distance as we are headed back home. It is a feeling that I can’t describe and some of you probably think I am nuts.

And then there is the Annual Bridgewalk! The ONLY time foot traffic is allowed on the bridge is on Labor Day. If you have never done that, please put it on your list of things to do before you die!

AND, as part of the 50 year birthday celebration of Mighty Mac, at the St. Ignace Welcome Center, you can enter a drawing to be the lucky person awarded a trip to the top of one of the towers!!! THAT is something I would do in a heart beat!

I just can’t understand how and why the Golden Gate bridge gets so much acclaim and the Mighty Mac is totally unknown to so many Americans! Did you know that;
Total Length of Bridge (5 Miles)
26,372 Ft.

Underclearance at Midspan for Ships
155 Ft.

Maximum Tension in Each Cable
16,000 Tons

MDOT unveils special online media kit for 50th anniversary of Mackinac Bridge
June 01, 2007
The Michigan Department of Transportation _(MDOT) today announced that a new online media kit is available for the 50th anniversary celebration of the Mackinac Bridge. Media representatives can access information online at www.michigan.gov/mackinacbridge. Materials include: A list of 2007 Straits-area activities, bridge history, photographs, crossing statistics, a link to commemorative posters for purchase, and other 50th anniversary-related materials. MDOT is partnering with the Michigan Department of History, Arts and Libraries to commemorate this historic milestone. Michigan residents (and others) are encouraged to join with Michigan History magazine as they pay tribute to the 50th anniversary of the Mackinac Bridge with a special issue. Available in July 2007, the expanded 96-page issue will be filled with stories about life before the bridge, the businessmen who bankrolled it, the fearless workers who built it, and one daring pilot who flew under it. All subscriptions paid for and received prior to July 1 will include this fantastic issue. For more information, go to www.michiganhistorymagazine.com or call 800-366-3703.

SPREAD THE WORD!!! THE MIGHTY MAC IS MORE BEAUTIFUL THAN THE GOLDEN GATE!!! More on this at a later date!
Posted by Cathy Clementz at 7:06 AM